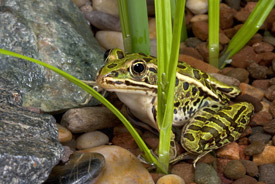 NCC’s Buffalo Pound property consists of 866 hectares (2,140 acres) of native grasslands and seven kilometres of shoreline along the north shore of Buffalo Pound Lake. These grasslands help filter the drinking water for approximately one-quarter of the province’s population, including Regina, Moose Jaw and several surrounding communities.

Grasslands help buffer water and sequester and store carbon. Grasslands are one of the most endangered ecosystems in the world. This area is at risk for future development, as shorelines are in demand for recreation and industry. Conserving this important natural area can sustain a healthy ecosystem, including supporting recreation and economic needs. Keeping the province’s grasslands and lakes healthy benefits the people and wildlife who depend on them.

Buffalo Pound supports fish, waterfowl and other migratory birds. The property is in the Upper Qu’Appelle Natural Area, which is an important wildlife habitat corridor that stretches across southern Saskatchewan. This natural area is home to many plants and animals, as well as wildlife listed under Canada’s Species at Risk Act, such as:

“NCC’s Buffalo Pound property is a beautiful area that contains native grasslands along a premium shoreline. Conserving these grasslands is one of the most important things we can do to help the plants and animals that live there, as well as filter the air we breathe and provide quality drinking water in southern Saskatchewan.” – Cameron Wood, Director of Conservation for the Nature Conservancy of Canada in Saskatchewan.

The acquisition of NCC’s Buffalo Pound property was made possible thanks to the generous financial support of several partners and donors: