Hole in the Wall (Photo by Jason Bantle)

American badger at Hole in the Wall (Photo by Jason Bantle)

The Nature Conservancy of Canada’s (NCC's) Hole in the Wall property is rich in grasslands, plants, animals and history. Hole in the Wall is a priority conservation site, as the vast majority of the property’s 907 hectares (2,240 acres) are intact native grasslands. The area also includes 74 hectares (183 acres) of critical wetlands and riverbank habitats.

Hole in the Wall is located north of the Big Muddy Valley and forms part of the largest area of intact grasslands in Saskatchewan. Species found in the area include burrowing owl, American badger, ferruginous hawk, northern leopard frog, Sprague’s pipit and the provincially listed rare white milkwort plant. The area also provides excellent foraging habitat for birds of prey. Golden eagles and prairie falcons nest in the nearby Big Muddy Valley cliffs.

The Big Muddy Valley is rated as Heritage Sensitive by the Ministry of Parks, Culture and Sport. On the property, you can find historical artifacts such as tipi rings and burial rock cairns. In the valley to the south, near the town of Big Beaver, there is rich First Nations history, such as the only known Buffalo Effigy in Canada. The Minton Turtle Effigy is located 9 kilometres southeast of the property. Sitting Bull may have spent some time in the area in the late 1870s when he fled the U.S. after the battle of Little Bighorn.

Remarkable outlaw stories are shared about stations that were set up approximately every 10 miles, with rested horses ready to help anyone trying to outrun the law. The Big Muddy Valley was Station Number One along the Outlaw Trail, set up by Butch Cassidy. The outlaws could ride from the Big Muddy Valley, all the way south to Ciudad Juarez, Mexico, along the Outlaw Trail. There are stories of cattle and horse rustling throughout the area in the early 1900s. Rustlers would steal cows or horses from the U.S. and sell them to Canadians or vice versa. 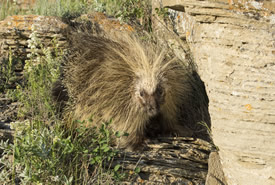 Porcupine at Hole in the Wall (Photo by Jason Bantle)

The Big Muddy region forms part of the largest area of intact grasslands in Saskatchewan. These grasslands are contiguous with native grasslands crossing the border into Montana and continue in Saskatchewan from the U.S. border, north for over 40 kilometres. The valley itself forms a contiguous corridor of native habitat that connects through the Wood Mountain Plateau, all the way to the west block of Grasslands National Park and the former Val Marie PFRA pasture, a swath of grasslands over 300 kilometres wide.

Across the province, NCC works with local ranchers to graze the lands. Grazing is an important conservation tool that can be used to improve the environment that prairie species depend upon. NCC will continue to graze the Hole in the Wall property to enhance biodiversity and support livestock production.

The incredible natural diversity found at the Hole in the Wall property is an example of the urgent need for NCC’s work. With your help, we have an opportunity to protect endangered grasslands, wetlands and the at-risk species that live there.