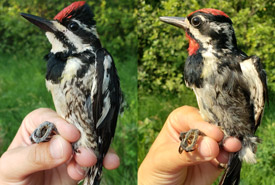 Female (left) and male (right) yellow-bellied sapsuckers captured at Big Valley MAPS. In this species, the sexes can be differentiated by the presence of red on the throat. Males have red throats and females do not.

This year (2021) marks the fourth season of the Big Valley MAPS (Monitoring Avian Productivity and Survivorship) station. Overall, the season was a great success! We captured 121 birds of 16 different species over six sessions. Of these, 86 were newly banded birds and 35 were recaptured birds that already had a band.

The MAPS program monitors bird demographics and contributes to bird conservation across North America. A standardized system of fine mesh nets is used to capture birds during the summer nesting season. MAPS operators band the birds, collecting data on their age, sex, body condition and reproductive status. The captured birds are given a lightweight, uniquely numbered aluminum leg band and released unharmed. 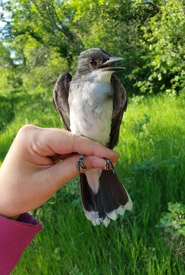 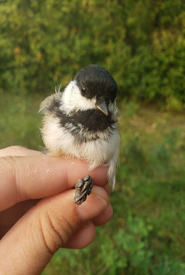 We did not capture any birds banded at other stations this season; however, we did catch birds banded in previous years at the Big Valley MAPS station during every session, except one. The oldest bird we recaptured was a male American redstart, which was originally banded in 2018 as an after-second- year bird. This means that this bird is at least five years old this year! All the other recaptured birds from previous seasons were originally banded in 2019: two yellow warblers and a yellow-bellied sapsucker initially banded as second-year birds, and a red-eyed vireo initially banded as an after-second-year bird.

Data from this season will enable Saskatchewan conservationists to learn the health of local bird populations and will also be used to inform the Nature Conservancy of Canada's management of the Big Valley property. In addition, since MAPS is a continent-wide program, data collected at Big Valley will also contribute to conservation of birds across North America. We are already looking forward to going back out in 2022 for another successful MAPS season!