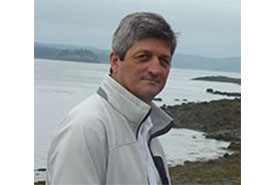 A New Brunswick lawyer specializing in corporate litigation and regulatory work, René was retained by the Nature Conservancy of Canada (NCC) to help the charity purchase a tract of land near the Lower Bay of Fundy. The property was home to a rare plant at risk of extinction and found at only two sites in the province.

“We bought 100 acres of no-man’s land to save a flower,” René remembers, laughing.

The simple act of conservation got him thinking. “How could I not support an organization that would buy 100 acres to save a single flower?”

But that’s only one part of their unwavering commitment to conservation. The same year as that game-changing phone call, René encouraged the firm he worked with at the time and, later, Actus Law Droit where he’s now a partner, to also support NCC philanthropically.

“NCC is the jewel in my crown,” René says, “and it matters to the people in our firm, too. We all have children. We all want to conserve nature for them.”

René and his colleagues make regular trips to NCC’s properties to see their gifts in action. His personal favourite is Johnson’s Mills Shorebird Reserve and Interpretive Centre, an important stopover site for up to a quarter of a million shorebirds every year. NCC has conserved 215 hectares (532 acres) in the area — with René’s help.

“Seeing thousands of birds covering the sky like a blanket is an awesome sight,” he says. “Knowing we have something to do with it makes it even better.”