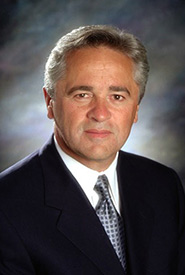 Brian Tobin may live near Toronto, but his heart is in Newfoundland and Labrador where he was born and raised and where he fell in love with the province’s natural, wild beauty.

“My best memories are of being 13, 14, 15 years old in an 18-foot canoe with friends, going into Goose Bay and out to the Labrador Coast, or literally being on the trail, just me and the dog, disappearing into nature. You know that kind of thoughtless journey where you just let the incredible space you’re in lead you?” he says.

That deep connection to nature inspired and informed many of Brian’s life choices, including three years as Canada’s minister of fisheries and oceans in the mid-1990s, and a term as Newfoundland and Labrador’s premier from 1996 to 2000. Among his many achievements, Brian led the implementation of the Oceans Act, ensuring a sustainable future for Newfoundland’s economy.

While premier, his government invested in heritage by combining the provincial archives, art gallery and museum into one magnificent space called The Rooms. He credited his wife, Jodean, for convincing him that heritage, once lost, cannot be recreated.

In 2012, he partnered with the Nature Conservancy of Canada (NCC) to help raise funds for a project celebrating the unique biology and geography of Labrador. More recently, he served as co-chair of NCC’s Landmark Campaign, mobilizing his cross-Canada connections and deep love of Atlantic Canada to help raise more than $750-million for conservation.

“To live and breath this air, in this place, is a privilege that all Canadians have, but it’s one that we shouldn’t take for granted,” he says. “I think of the words of the Haida Gwaii. ‘We do not inherit the land from our ancestors, we borrow it from our children.’”

As a businessman, politician, husband and father of three, Brian is keen to continue to play a role in ensuring Canada’s precious natural spaces are conserved for generations of Canadians to enjoy — including his own.

He trusts that NCC is the organization to make that happen.

“There are a handful of organizations in every space that are just doers, that just make it happen right now, and they do it effectively. NCC is the best example I can think of for that. They just go out and get it done.”