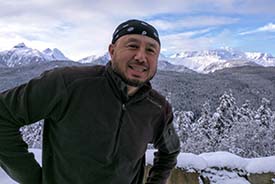 Call of the great outdoors

When British Columbia tech entrepreneur Jack Gin founded the video surveillance company Extreme CCTV in 1997, he made it his mission to interview and get to know every employee — bright and talented Canadians who came from all parts of the globe.

“Invariably, when asked why they immigrated to Canada, they would say for their children and for the great space, the outdoors, the clean air, the ocean and the mountains,” he remembers.

Jack could relate. Born and raised in Vancouver, he chose to stay put for many of the same reasons. He grew up playing street hockey, soccer and skiing. He later bought and painstakingly restored a 1970s cabin near Whistler, so he could continue to immerse himself in the great outdoors.

In 2008, he sold Extreme CCTV to explore his twin passions: mentoring the next generation of tech entrepreneurs, and making Canada and the world a better place. He established the Jack & Sylvia Gin Foundation and, soon after, NCC came calling.

NCC was in the final stages of fundraising for an important conservation project on the Bella Coola estuary, about 1,000 kilometres north of Vancouver. Directly adjacent to other conservation lands and essential habitat for salmon, grizzly bear, migratory birds and other wildlife, the 70-hectare (174-acre) property was the last unprotected private land at the mouth of the Bella Coola River.

“They called me in what felt like an hour of need,” says Jack. He didn’t hesitate to act, despite having never set foot in Bella Coola.

His gift was combined with other generous donations and funding from the Government of Canada to create NCC’s Tidal Flats Conservation Area. Conserving the intertidal marshes, mudflats and tidal channels ensures that the estuary will remain naturally productive and accessible to Bella Coola residents for recreation and nature appreciation for the long term.

This is what makes Canada one of the wealthiest countries in the world and the place so many people aspire to live, Jack explains.

Jack Gin is a generous supporter of the Landmark Campaign. Learn more about the campaign and what you helped accomplish, here >