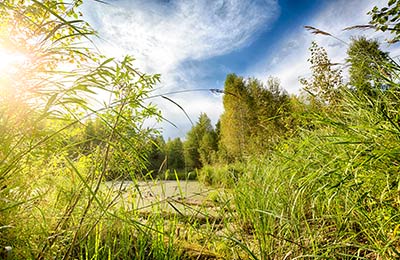 The Busenius property is characterized by mixedwood boreal forest, which contains a mixture of broad-leaf (aspen, balsam poplar, paper birch) and coniferous (white spruce, black spruce, tamarack) trees. Forest covers the majority of the property and it is in very healthy condition. Mixedwood boreal forest covers more than 78 per cent of this property, which provides important habitat for ungulates (hoofed animals), songbirds and mammals.

This region provides important hydrological functions, and provides over-wintering and rearing habitat for a high diversity of fish species. A number of raptors also nest here, including bald eagles.

This property also contains native mixed grass prairie, of which only 23 per cent remains in Canada.

With its close proximity to the cities of Edmonton, Spruce Grove and Stony Plain, the demand for recreation activity is high within this area. Over time, this has resulted in fragmentation of the Upper North Saskatchewan River Basin’s land base into smaller land parcels. This has resulted in the ongoing degradation or removal of much of the mixedwood boreal forest systems and accompanying native mixed grass systems in the area.

Thanks in part to generous funding from TD Bank Group (TD) through the TD Forests program, this property has now been protected for the long term.

The TD Forests program will increase the amount of forested lands protected and cared for by NCC. Over five years, the program will conserve an average of more than two football fields a day. TD and NCC are also engaging more Canadians in the mission to conserve our forests, which will safeguard not just the trees, but the living creatures that rely on forested habitats.