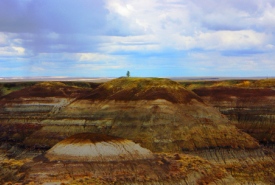 The Nodwell property is located in Horseshoe Canyon, an isolated pocket of badlands amidst the Alberta prairie, 17 kilometres west of Drumheller on Highway 9. Horseshoe Canyon is a familiar vista to many Albertans and a favourite spot for tourists to catch their first glimpse of this unique aspect of Alberta’s natural heritage.

The Nature Conservancy of Canada (NCC) has collaborated with local landowners to ensure the long-term conservation of this distinctive canyon, which is one of the best-known sites in the Canadian Badlands.

Prairie wild grasses, once the nourishment of herds of plains bison, can still be found in the Nodwell property along coulee edges, on top of mesas and on the valley floor. These grasses are high in nutrient value and have evolved despite the pressures of drought, wildfires and grazing.

Many plant and animal species have adapted to the harsh environment of the badlands. Several species of cactus can be found here, along with prairie crocus, seven species of sage, blue birds, garter snakes, mule deer and more.

The geological layers of Horseshoe Canyon were laid during the Cretaceous period some 70 million years ago, when dinosaurs roamed the lush forests and swamps of the region. These layers can now be seen on the exposed walls of the canyon.

The first humans to discover fossils here were the First Nations people, who believed the bones belonged to the giant ancestors of the bison. The Alberta badlands were seen as a graveyard for the ancient creatures, protected by the spiritual hoodoos that stood at guard over the bones. The land at Horseshoe Canyon was once within the nomadic domain of the Blackfoot tribe. Bison, their primary food source, also provided clothing, shelter, tools, fuel and ceremonial ornaments.

In 1743, when French Canadian explorers Francois and Louis Joseph de la Verendrye first encountered the landscapes of mesas, buttes and coulees on their travels through the prairies, they described the landscape as "mauvaise terre," or "badlands." The early settlers viewed Horseshoe Canyon as an area that had limited agricultural value and poor accessibility, so the name "badlands" endured.

This project is credited to Leila Nodwell, who passed away in April 2000. Leila believed deeply in the importance of maintaining the canyon’s natural state and worked for many years as an interpreter here, where she introduced visitors to its many unique features. In tribute to Leila’s memory, the Nodwell family purchased the 130 hectares (320 acres) that encompass the western half of the canyon, and subsequently sold the land to NCC at a substantial reduction.

More than 100 donors have made contributions in Leila's memory to support this initiative. In particular, the Suncor Energy Foundation has made a significant financial contribution to this project as part of its larger commitment to NCC’s work in Alberta and Ontario. In addition, an ongoing partnership with EnCana Corporation has enabled NCC to continue improving and restoring this natural ecological wonder.

The remainder of the canyon is held privately by local landowners similarly dedicated to maintaining the canyon in its natural state.