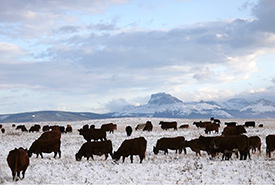 Located northeast of Waterton Lakes National Park, the 1,969-hectare (4,865-acre) Palmer Ranch is located on the east bank of the Waterton River. Due to ownership changes over the years, it has historically been called the Cochrane Ranch, the Church Ranch and the Palmer Ranch.

In 1999, co-owners Scott and Tom Palmer approached the Nature Conservancy of Canada (NCC) with the idea of building a lasting legacy on this land. It was NCC’s first large conservation agreement on the boundary of the National Park, and was the catalyst for many subsequent projects between NCC and local ranchers.

Scott Palmer’s daughter Julia is keen to continue her family’s legacy of ranching on this land and to steward this property in a way that enhances the natural landscape, in collaboration with sustainable cattle ranching.

“I love this place. If I could do one thing in my lifetime well, I want to leave it either intact or better than it was before. I want to contribute to a place, a landscape, that has meant more to me than I could ever put into words,” said Julia. “Ranching allows me to live here, and I really hope it is what I’m able to do for the rest of my life."

This property contains a mixture of native grassland, modified grassland, shrubland and aspen forest. There are many seasonal wetlands on the property, in some years there are up to 125 ponds. It is estimated that at least 55 hectares (133 acres) of the property are covered by water during wet years; however, in dry years, only three of these water bodies retain water.

The large, adjacent Waterton River has had large flood events about once a decade since 1964. The river supports many native fish, including pike, bull trout, western cutthroat trout and mountain whitefish. The introduced rainbow trout, brown trout and eastern brook trout can also be found here.

Elk often use the southwest portion of the Palmer property in the spring and summer and move into Waterton Lakes National Park during the hunting season, venturing out of the park only during periods when deep snow covers the ground and the temperatures fall. Mule deer and white-tailed deer use the ranch year round. Coyotes and red fox are frequently seen on the property, along with the occasional grizzly bear.