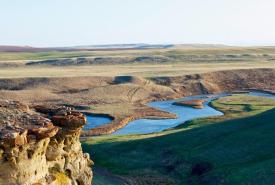 The Milk River Ridge natural area is located in the Foothills Fescue Natural Sub-region of the Grassland Natural Region of Alberta, where only 16 per cent of the native prairie remains. It is rich with natural and cultural heritage and was established to protect a large contiguous tract of intact fescue grasslands. Many natural features, including sandstone outcroppings, hoodoos and fossils, are also found in this region. Archaeological artifacts provide a glimpse into past Indigenous communities and the early Prairie homesteaders.

The Sandstone Ranch is situated within the Milk River Ridge natural area. The property and encompasses 1,677 hectares (4,143 acres) of native grasslands, which provide grazing for livestock and support a wide diversity of wildlife. Species like ferruginous hawk, peregrine falcon, prairie falcon and pronghorn have been observed on the ranch. The North Milk River flows through the property and provides important habitat to the nationally threatened eastslope sculpin.

The privately-owned portion of this property is jointly owned and managed by the Nature Conservancy of Canada (NCC), the Alberta Conservation Association and the Alberta Fish and Game Association with NCC acting as the lead manager. Together, NCC and its partners (Alberta Environment and Parks - Public Lands and the Sandstone Ranch Grazing Co-operative) also manage the Crown lease lands.

The Sandstone Ranch has also participated in the MULTISAR Program: a collaboration between the Government of Alberta, non-government organizations and landowners. The collaboration aims to manage habitat for multiple species at risk. As part of this program, a habitat conservation strategy was developed in 2008 to help guide the management of this working ranch for both wildlife and cattle.

The Sandstone Grazing Co-operative consists of multiple members who graze 733 hectares (1,810 acres) of lands owned by NCC and its partners, and 944 hectares (2,333 acres) of Crown lease land. Under the agreement, NCC mortgaged the purchase of the grazing lease by the Sandstone Grazing Co-operative. NCC staff developed a stewardship credit program that provides ranchers the opportunity to earn credits by implementing beneficial management practices (BMPs) on their own properties. These credits partially offset the fees of their yearly mortgage.

This program provides incentives for the leaseholders to maintain or improve stewardship of the fescue grasslands and riparian areas beyond the borders of the Sandstone Ranch. Rotational grazing is an example of a BMP that has been implemented by some of the leaseholders. This rotation allows native plants and riparian areas a chance to recover. In turn, this helps create healthy, sustainable grassland habitat that both cattle and wildlife species depend on.

This project was made possible with the support of the Government of Canada under the Natural Areas Conservation Program.