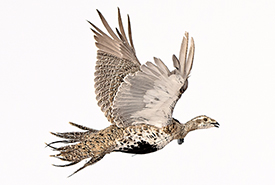 Sage grouse released at the property (Photo by Leta Pezderic)

Ecological restoration takes work, but it can make a big difference for biodiversity.

One of the places where the Nature Conservancy of Canada (NCC) is working to restore a property in the southeast of Alberta. This work is being done for the benefit of greater sage-grouse, one of the fastest declining endangered species in Canada.

The property was acquired by NCC as a safe and hospitable place where the Wilder Institute/Calgary Zoo could release captive-bred sage grouse, to boost the species’ plummeting numbers.

It was selected because of its location within an area identified as important for the species. It is near some of their last remaining breeding (lek) sites in the province, explained Megan Jensen, NCC’s natural area manager for southeast Alberta.

“We looked for a piece of land we could restore in critical sage-grouse habitat, where they could release the grouse,” says Megan. “It was the only piece of land in a sea of grassland that was once cultivated.”

One of the first steps in restoring the area for sage-grouse was removing two old rail cars. This was done with support from the Alberta Ministry of Environment and Protected Areas.

This was important, as the cars were being used badgers, coyotes and foxes as a place to hide. Remote cameras set up on the property recorded images of these species throughout the area. They were also being used as perches by raptors and magpies, allowing these birds to survey the surrounding prairie for prey.

“When you’re in the middle of critical sage-grouse habitat, it’s important not to give any predator an advantage,” says Megan.

The property was also made more sage-grouse friendly through the installation of high visibility clips on the area’s barbed-wire fencing.

While this barbed-wire fencing is necessary because of cattle grazing in the surrounding area, it also poses a threat to sage-grouse, which can be injured or killed by flying into the hard-to-see wire. The clips make the wire more visible, helping the birds avoid collisions.

Another adjustment to the fence lines was the installation of plastic cones on the top of the fence posts to create fewer perches for predator birds in the area.

“They just prevent hawks and other birds from sitting up there and having a better vantage point,” says Megan.

With those steps complete, Megan started working on restoring the vegetation on the property, where crops had once been planted, but hadn’t been for several years. A restoration specialist helped devise a plan for turning the dry and barren land back into a grassland oasis for the grouse.

“The plan is to return it to as close to the native grassland surrounding the property as we can, so it offers food and protection for sage grouse,” she says.

Perhaps surprisingly, the first step was replanting the land with crops again. 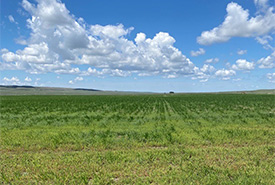 Restoration underway at the sage grouse property. (Photo by NCC)

“We did that for the soil — to make the hardened soil looser, to re-establish some of the nutrients in the soil, and to provide some biomass and cover” says Megan.

The following year, native plant seeds were planted at the property. However, nature was less than cooperative.

“We received less than 130 millimetres of rain that summer, which Is what is needed to germinate most of the plants, and it was a really hot year,” she says. “That was unfortunate, because many of the plants did not grow.”

But all was not lost.

The following year, the team decided to take a bit of a different approach. They planted barley as a cover crop (crops planted to cover the soil to enhance the environmental conditions of a site, rather than to produce a crop), and it worked.

“It helped keep some of the moister in the soil, and some of the native grasses started to grow,” she says.

The new growth was an encouraging sign that restoration at the site was back on track. Next year, Megan is looking to keep this success going by planting more native grasses. Eventually, plugs (small plants) of other native species will be planted at the site, including sage brush, a shrub that sage-grouse depends on for food and shelter.

Over time, plant and wildlife specialists will survey the property to see how the natural community there is changing over time. This will help show if the restoration efforts are successful.

This story helps demonstrate that restoring native prairie is difficult and time consuming. To help NCC not only restore but also conserve our native grasslands, which are home to species at risk, including greater sage grouse, consider donating today.