Dinosaur bones at the Nodwell property (Photo by NCC) 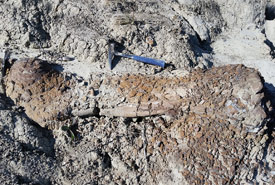 In July 2020, Nathan Hrushkin and his father, Dion, discovered partially exposed bones on the Nature Conservancy of Canada’s Nodwell property. This sighting of few exposed bones exploded into national news, as not only are fossils a rare find in the carbon member that the fossils were found in, but they were an almost complete skeleton of a young hadrosaur, a very rare find both in age class and how complete the skeleton was.

When first interviewed last summer, François Therrien, curator of Dinosaur Palaeoecology at the Royal Tyrrell Museum of Paleontology said “This young hadrosaur is a very important discovery because it comes from a time interval for which we know very little about what kind of dinosaurs or animals lived in Alberta. Nathan and Dion’s find will help us fill this big gap in our knowledge of dinosaur evolution.”

Since the initial find, the cleaning and preservation of the bones has been completed, and François is ready to begin closer research on the bones. Due to COVID-19 restrictions, François had only seen pictures of the cleaned skeleton. From his initial observation of pictures of the cleaned skull, he has observed many similarities to a hypacrosaurus, a duck-billed dinosaur that, at its adult size, would have reached 10 metres in length.

However, hypacrosaurus were believed to have existed from approximately 71.5 to 69 million years ago, right up to the fossil record gap. The juvenile hadrosaur found existed after the proposed time the hypacrosaurus went extinct. This is where the importance of this specimen is highlighted.

The hadrosaur lived during the beginning of the time gap, a time where there is evidence of a “fossil turnover,” where many species of dinosaurs went extinct in a similar time period and were replaced with a new species. According to François, there are two main possible revelations the Nathan hadrosaur could point to.

“One,” François said. “is that Nathan’s hadrosaur is a replacement species for the hypacrosaurus. Secondly, it could be evidence that the hypacrosaurus survived the fossil turnover, or that the turnover happened later than we thought.” Closer inspection and more research will need to be completed before conclusions can be made.

Young hadrosaurs are known from other digs to have hung out in groups, and François theorizes that perhaps the Nathan hadrosaur and perhaps a companion tried to cross a fast-flowing river and were both swept away. A perfect series of events would have to have occurred for this to happen, as the time period that the Nathan hadrosaur lived was characterized by swamps and slow-moving rivers, both of which were not well-suited to the fossilization process, which require bones be swept under layers of soil to be preserved.

Our hadrosaur was found in a rare a flowing river, where it was likely pushed into a log jam and both logs and the dinosaur were pushed underground and buried together, as evidenced by the fossilized logs surrounding the skeleton. François emphasized the importance of looking not just at the bones themselves, but at the surrounding area. “Surrounding rocks tell the story,” he said.

The public is welcome to visit the Nodwell property, but please stay on the trails and be a respectful visitor, as this is a conservation site.

If another fossil is found, it is important to leave the fossil where it is, take pictures, record your location either using GPS or Google Maps, then send the data to the Royal Tyrell Museum for review.