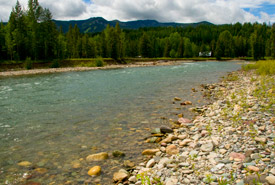 Flathead River, BC (Photo by NCC)

Straddling the BC-Montana border in the western shadow of the Rocky Mountains, the Flathead River Valley is one of North America’s most spectacular wilderness areas. The BC portion of the valley spans almost 160,000 hectares (400,000 acres) of forest, river and mountain landscape. With no permanent human settlement today — and despite almost no protection from development — the valley has maintained its ecological integrity as one of the most abundant natural areas on the planet.

The Flathead River Valley supports an incredible diversity of species, including bighorn sheep, moose, wolverine, elk and the highest density of grizzly bears in the interior of North America. The BC portion of the valley is largely undeveloped and is still home to the same variety of plants and animals that existed 400 years ago.

“There is no other large watershed in North America like the Flathead — the richness of its waters, the abundance of its carnivores. It is a truly wild river in southern Canada,” says biologist Richard Cannings, a past board member for the Nature Conservancy of Canada (NCC).

Working together for conservation

The BC Flathead has remained ecologically rich despite the presence of mining tenures throughout the valley over the past century. Until recently, the potential for mining and oil, gas and coal exploration represented the biggest threat to the natural values of this celebrated wilderness area.

Now, thanks to the collaborative efforts of many groups and governments on both sides of the border, a new level of conservation commitments will help protect the breathtaking Flathead River Valley. The combined efforts of two national governments, provincial and state leaders, conservation groups and private citizens have fulfilled a common vision of removing the most significant threat to the Flathead River Valley. This is an important step in conserving one of North America's premier expanses of wild land.

In 2011, NCC, along with our U.S. partner, The Nature Conservancy (TNC), agreed to assist the BC government in implementing the Flathead Watershed Area Conservation Act, which permanently prohibits coal mining as well as exploration and development of oil, gas and mineral resources in the BC Flathead. To do this, NCC and TNC raised over $10 million to support the new legislation and to assist the Province in maintaining and enhancing high conservation standards in the natural area in order to protect the rich diversity of plant and animal life.

“Nature does not recognize international borders,” said Linda Hannah, regional vice-president of the Nature Conservancy of Canada in BC. “We are extremely proud to be able to achieve globally significant conservation in partnership with governments and conservation groups on both sides of the border.”

The future of the Flathead

The Flathead River Valley remains largely crown land managed by the Province. (One exception is the Flathead River Ranch, a 78-hectare (192-acre) private property on the border that NCC purchased for conservation in 2002.) Land use in the area continues to include backcountry recreation such as guide outfitting, hunting and fishing, as well as logging. In addition to the legislation and regulations that prescribe how these activities are managed, land use in the Flathead is guided by the Southern Rocky Mountain Management Plan. Any further changes to the designation and management of the Flathead River Valley are ultimately the decision of governments.

We are grateful for the international cooperation that made this project possible: