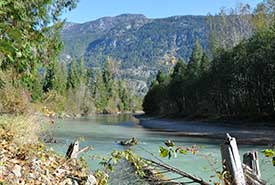 Ryan River, BC (Photo by NCC)

The Pemberton Valley cuts a narrow path through the Coast Mountains. It's a corridor well-used by grizzly and black bears, moose, deer and many other animals. The Ryan and Lillooet rivers flow through this valley, giving life to the diversity of plants, animals and human communities that thrive here.

The Ryan River Conservation Area encompasses both old-growth forest and marshy wetland, and is a haven for the range of wildlife found in the valley. The Nature Conservancy of Canada (NCC) acquired this property in 2020 in order to permanently conserve its essential and flourishing wildlife habitat.

The Ryan River Conservation Area is strongly influenced by the river on which it is situated. Most of this land is on the river's floodplain, ensuring the forests and meadows alike are very wet. The wetlands have been identified by the Canadian Wildlife Service as being of the highest ecological quality.

Wetlands provide immense benefits to biodiversity, with one in three provincial species at risk relying on wetlands to meet some or all of their needs. By filtering and purifying fresh water, controlling stream flows, recharging groundwater and preventing erosion, wetlands provide invaluable ecosystem services for human and more-than-human communities alike. 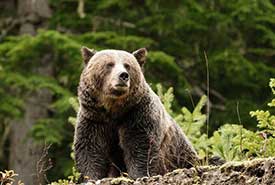 The Ryan River Conservation Area lies within the provincially threatened Squamish-Lillooet Grizzly Bear Population Unit. Provincial biologists have estimated 59 bears in this unit, which is a low number for ensuring its long-term health and vitality.

Protecting undeveloped lands that connect the valley bottom to the forested slopes of the surrounding mountains is essential for maintaining the bears' ability to connect with other geographically separate bear populations.

Rivers and streams provide important spawning and rearing grounds for salmon and other fish species. The Ryan River Conservation Area follows the river for over two kilometres as it courses toward Lillooet Lake. The river is known to support coho salmon, as well as rainbow, cutthroat and bull trout. 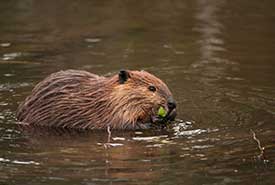 The land bears abundant evidence of beaver activity. These "ecosystem engineers" enhance wetland areas by creating shallow ponds and slowing down the flow of streams with the construction of their dams and lodges.

This project has been made possible by the contributions of many funders, including the Government of Canada through the Natural Heritage Conservation Program, part of Canada’s Nature Fund, Pemberton Wildlife Association, Habitat Conservation Trust Foundation, Longhedge Foundation, U.S Fish and Wildlife Service and several individual donors.

The Pemberton Wildlife Association, Coast to Cascades Grizzly Bear Initiative and Conservation Northwest provided valuable local insight into the natural values in the Pemberton Valley and contributed input into the Nature Conservancy of Canada’s priorities for conservation action in the area.