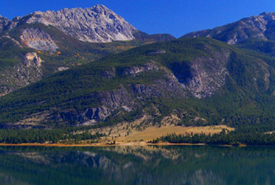 Wedged between the Rocky Mountains and the Purcell Range in southeastern British Columbia, the Rocky Mountain Trench is a flat-bottomed valley carved into existence by the Columbia River. Here, wildlife roams between mountain ranges, birds rest midway on their seasonal migrations and rare plant communities grow.

The Upper Columbia Valley lies at the heart of the trench. The valley maintains an ecological richness that is quickly being eroded in surrounding areas. This is the only stretch of the Columbia River that has been left unaltered by dams. It is also part of the longest uninterrupted wetland in western North America. Unlike many other areas in the world, this region still supports a full suite of large native mammals, such as bear and cougar, elk and deer. The area has been a hot spot of conservation activities over the years, and continues to be a conservation priority. 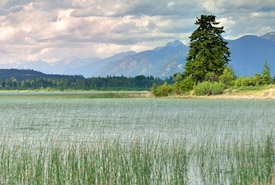 Located on the east short of Columbia Lake, near the headwaters of the Columbia River — Lot 48 is part of a network of conservation lands and wildlife management areas that spans more than 7,600 hectares (18,500 acres). This protected landscape functions as a critical north-south and east-west wildlife corridor, providing first-class habitat for several rare and endangered species. The native grasslands here represent the largest connected expanse of prime winter range for deer, elk and other grazing animals in the Upper Columbia Valley.

As part of the Pacific flyway, these lands are also important for migratory birds. 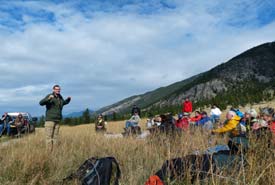 The east side of Columbia Lake has great spiritual significance for the Ktunaxa Nation, whose stories celebrate the area as the site of their Creation.

Historically, Columbia Lake served as a major travel route to the prairies. It was a site for seasonal camps and ceremonial events. The area also provided salmon, game and other food gathering.

Numerous archaeological sites have been documented on the east side of the lake, including one of the main traditional transportation routes through the valley, known as the Spirit Trail. 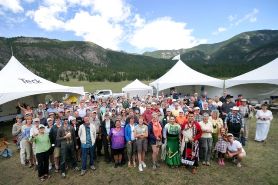 A group shot from the Lot 48 celebration (Photo by kimberleyrae.ca)

Protecting Columbia Lake — Lot 48 from development was a long-standing priority for the conservation community, as well as the Ktunaxa First Nation and other residents of the Upper Columbia Valley. The property was the last remaining parcel that was not designated for conservation on the east side of the lake. with the support of many partners, NCC acquired the property for conservation in 2011. Preventing recreational development and further road construction in the area has safeguarded the many natural and cultural values of the whole eastern side of Columbia Lake.

and other private donors