A thirst for wetlands 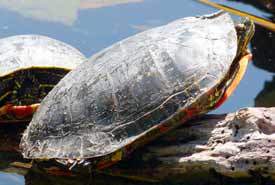 Converting gravel parking lots from sterile expanses into thriving, nature-filled landscapes is becoming something of a habit for the Nature Conservancy of Canada (NCC) in BC. We did this in 2007 in the Campbell River Estuary on Vancouver Island. And we have just completed a similar restoration project near Fernie, along the Elk River, where we transformed an old gravel pit into a naturally functioning wetland.

When the gravel pit was opened in 1999, spruce, cottonwood and aspen trees were pushed to the side. The topsoil was scraped, salvaged and stockpiled in large berms. Gravel was mined and shipped to homeowners and businesses in the region to build roads, driveways, houses and septic systems. Eventually the gravel in the pit became too mixed with soil and the operation was closed. By this time the pit was filling with water each spring. When NCC acquired the gravel pit as part of a much larger conservation project — the Elk Valley Heritage Conservation Area — the potential for the area to be reborn as a productive wetland was obvious. 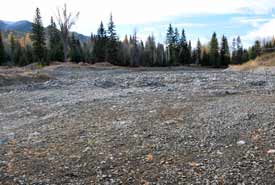 "Wetlands have been lost in the Elk Valley due to the cumulative impacts of road, railway and urban development. They’ve been drained, filled in and cut off from the Elk River,” says Beth Millions of the Elk River Alliance (ERA). ERA is one of the partner groups involved in the restoration project. "This project is an attempt to restore wetlands that provide important functions to locals for free, such as reducing the flood risk by soaking up and storing water. They recharge groundwater and later release it back into the Elk River during dry spells later, which is important for aquatic life, like fish. They also provide habitat for many species at risk.” 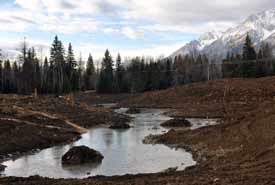 In addition to wildlife benefits, the new wetlands and streams will help control erosion, recharge groundwater and reduce flooding. They will also beautify the whole area and provide new wildlife viewing opportunities for visitors.

“We were lucky to get wetland restoration and training consultant Tom Biebighauser from Kentucky to help design and implement the project,” said Richard Klafki, NCC’s Canadian Rockies program director. “This five-hectare constructed wetland is the biggest project Tom has attempted to date.”

Transforming the steep walls of the gravel pit required re-grading the sides into gentle slopes and loosening and enhancing the soil.

“Before the restoration, the ground was impenetrable. Now the loosened soil absorbs runoff, improves growing conditions for plants and provides easier burrowing for critters like Columbia ground squirrels, which are the desired food of the endangered American badger,” notes Richard.

Niche habitats for wildlife were created by installing mounds of rock and soil for muskrats, boulders and logs for waterfowl and western painted turtles, and vertical tree root masses for bird nesting sites.

It isn’t easy or cheap to restore wetlands from a sterile industrial site. No one person can do it alone. Many organizations and businesses were involved in this first-ever attempt in the Elk Valley to restore a natural functioning wetland from an industrial landscape. The Fish and Wildlife Compensation Program and Columbia Basin Trust provided financial support. Local businesses Fiorentino Brothers Contracting and Foothills Silvaculture donated time and equipment to the project. The Elk River Alliance provided, trained and coordinated volunteers, who assisted with site surveying and replanting vegetation. ERA will also install an interpretive sign and bench to spread the message about the amazing natural transformation that is possible.

“All of these partners share the stewardship ethic it takes to transform human scarred landscapes back to a place used by rare species, like grizzly bears, western toads and American badgers,” said Lee-Anne Walker, ERA executive director. “None of us could tackle this type of project on our own.”