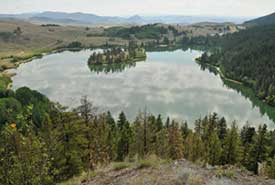 The Nature Conservancy of Canada’s (NCC’s) Lac du Bois Conservation Area lands are nestled in and around a popular provincial protected area of the same name just 30 quick minutes north of Kamloops. The park and NCC's conservation lands are favourite destination for locals looking to hike, birdwatch, snowshoe and picnic in a beautiful landscape not far from their back door.

Like many parks and protected areas across the province, visitation at Lac du Bois has increased during the COVID-19 pandemic as more and more people head outdoors for exercise, adventure and relaxation.

This increased visitation has an impact. Not all visitors practice the guidelines of responsible recreation. Without care, a seemingly innocent picnic on the weekend can leave a lasting mess that spells trouble for nature and wildlife in the area.

With a popular destination like Lac du Bois, lots of recreation leads to tonnes of garbage. Two and a half tonnes, to be exact. And that’s just from the past year! 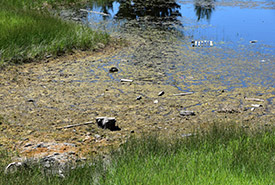 “We all know that dumping garbage in nature is not good for the environment,” says Danielle Cross, NCC’s Southern Interior stewardship coordinator. “But once one person leaves their trash behind, it seems to set a precedent. Seeing garbage in a natural area sends a message to some that it doesn't matter if they too dump their waste in the wetlands and grasslands. It also encourages other destructive behaviours, such as driving off-road vehicles over the grasslands and having fires wherever they want. All of this can cause significant damage to these sensitive grassland and wetland ecosystems."

Tackling a mountain of waste

In June, two of NCC's Wetlands Workforce team members, Julie Chesley and Angela Melney, headed out to Lac du Bois for the site's annual cleanup. The pair spent a week cleaning up a year's worth of yard waste, abandoned furniture and the scattered detritus of winter palette fires. The debris had been mixed up and spread around during the spring snow melt. Some even rolled down into a large wetland, leaving a unsightly trail of garbage in its wake. 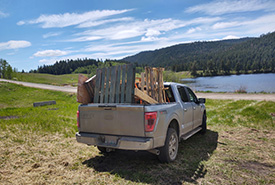 Ready for the local landfill (Photo by NCC)

The thousands of nails left lying around required a creative solution. The team used a specialized, large magnetic roller (works a bit like a lawn mower) to pick up all of the metal.

For the rest of the garbage, the team simply had to don work gloves and get to work picking up all manner of trash, large and small, and tossing it into the work truck. In the end the team took 10 loads, carrying a total of 2.5 tonnes of debris, to the local landfill, the majority of which was ash, nails and debris from the fires.

NCC is not the only group concerned about waste left behind in the Lac du Bois grasslands. The Kamloops Naturalist Club, the Friends of Lac du Bois and the Kamloops 4x4 club all contribute to the ongoing need to clean up after irresponsible visitors.

Why is this important?

NCC’s conservation lands host a multitude of plants and animals who depend on healthy, undisturbed and clean habitats in order to thrive. Lac du Bois is home to several species at risk, including the federally endangered American badger. 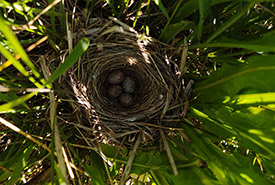 Numerous wetlands, small lakes and ponds occur here. Wetlands serve several positive ecological functions by providing important aquatic habitat to waterfowl and critters. As the clean up crew cleared away garbage from the edges of one wetland, they knew they were helping the western painted turtles that watched from their perch on a log in the wetland.

Picking up garbage wasn’t what NCC staff envisioned they would be doing as conservation professionals. But sometimes a little housekeeping is exactly what is needed to keep our natural home in order.