Exciting firsts for Manitoba on the Jackson Pipestone Prairie Project 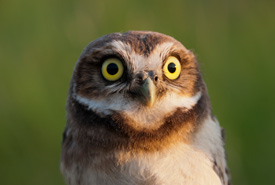 Manitoba region is excited to share two new firsts for our region on the newly acquired Jackson Pipestone Prairie property.

Through a partnership with the Manitoba Burrowing Owl Recovery Program (MBORP), three breeding pairs of burrowing owls have been re-introduced onto the property. The land has been used as a re-introduction site for over 12 years and the Nature Conservancy of Canada (NCC) provided a research permit and access to the land to MBORP to continue with their releases this spring as we learn more about the program and recovery work occurring on the property and in the area.

The owls will be monitored throughout the summer during the soft release within pens, and once there is confidence that they will hunt and provide for themselves, the pens will be removed allowing the pairs to breed and migrate over the winter. MBORPs program is working to bolster Manitoba populations of burrowing owls, the decline of which to near extirpation (locall extinct) in the province has been attributed to changes in the prairie landscape. Over 75 per cent of our native grassland has been cultivated and many of our wetlands have been lost. The remaining grassland areas in Manitoba and Canada are often heavily fragmented, which has reduced available suitable habitat for burrowing owls to nest. NCC in Manitoba is proud to support MBORP in achieving their goal of 23 nesting pairs of owls in Manitoba.​​​​​​​

Secondly, the Jackson Pipestone Prairie project is also the first project in Manitoba to support lark bunting, a threatened species identified in the 2018 gap analysis that identified species not occurring within an area under conservation status as part of NCC’s proposal to Environment and Climate Change Canada's Natural Heritage Conservation Program. These species were identified as priority focus for conserving habitat, and we are excited to add the first parcels of conservation lands in Manitoba supporting this species.

The West Souris Mixed-grass Prairie Natural Area, in which this project occurs, supports one of the last remaining, and least protected, grassland complexes in Manitoba that are large enough to support significant concentrations of grassland-obligate birds. Nestled within this landscape context, and alongside at least 10 other on-property species at risk, lark nunting records further highlight the significance of the property.

Check out some of the photos captured of the reintroduction of the burrowing owls on the property below!