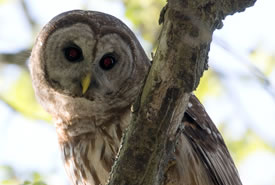 Barred owls nest in cavities of trees measuring six to 12 metres high. They are found exclusively in mature forests, which feature an abundance of prey and large mature trees with nesting cavities.

Barred owls prey on small mammals, such as: 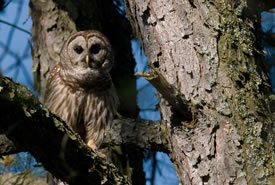 They also feed on reptiles, amphibians and invertebrates.

These birds have been known to prey on birds up to the size of a grouse and will also catch fish and crayfish from streams.

Although they have been known to hunt in the day, barred owls typically begin hunting for food just after sunset and through the night. Once they have caught their prey, barred owls will store it in their nest or in the crook of a tree. 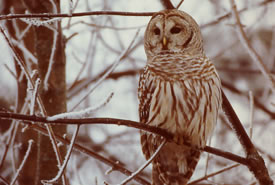 Barred owl fossils more than 11,000 years old have been excavated from areas of Ontario, Florida and Tennessee.

The oldest barred owl on record was 24 years!

Click below to hear the distinctive call of the barred owl (courtesy of Bill Hubick.)