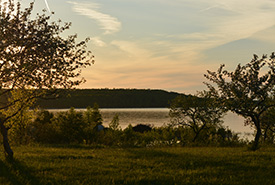 Since 2012, the Nature Conservancy of Canada (NCC) has been leading an international effort to conserve habitat on Cockburn Island, in northern Lake Huron. To date, NCC has protected 10,730 hectares (26,514 acres), over 60 per cent of the island, and an incredible 48 kilometres of undeveloped shoreline, in an effort to protect one of the largest Great Lakes islands and coastal ecosystems.

Learn more about how NCC is keeping Huron wild

Cockburn Island supports an incredible variety of globally significant species and plant communities. In a binational study of 32,000 islands in the Great Lakes, led by NCC and U.S.-based The Nature Conservancy, Cockburn Island was ranked one of the top 10 islands for its conservation importance, lack of disturbance and biodiversity. The diverse and undisturbed habitats here provide a benchmark of ecosystem health.

Cockburn Island provides important stopover and breeding habitat for migrating songbirds and waterfowl. Species including chestnut-sided warbler and wood thrush return to the island each spring to nest. The parcel that NCC intends to purchase borders existing conservation land. This presents an opportunity to preserve the integrity of this precious island ecosystem.

Unlike its sister islands, Drummond and Manitoulin, there has been very little development on Cockburn Island. Although the island once had a larger population of permanent residents and a ferry connection to Manitoulin Island, its isolation led to many of its residents leaving. Today, there are no bridges or ferry service to the island, and there is just one year-round resident, making the conservation opportunity all the more important and rare. Because of its relative isolation, the island’s ecosystems are in excellent condition.

With ever-increasing development in southern Ontario, it is rare to find such a complete and intact ecosystem such as the one found on Cockburn Island. The growing demand for second-homes and cottage developments has not reached here like it has in other parts of the Manitoulin Island Archipelago, where the unspoiled and scenic shoreline has caught the attention of potential buyers.

With just one permanent resident, Cockburn Island is one of the least populated municipalities in Canada. However, the population grows significantly in the summer, when several hundred people return to their cottages on the island year after year.

When NCC became the owner of half of Cockburn Island in 2012, it quickly became clear that islanders are immensely proud of this beautiful place and its rich natural and cultural history. The islanders and NCC share the same vision: that the island’s biodiversity, ecosystems and beauty are conserved as a remarkable natural heritage for future generations to enjoy.

NCC depends greatly on the local community for help with transportation, accommodation and caring for NCC properties. Many of the island’s residents helped shape the property management plan for NCC’s existing land, and volunteer their time to monitor and maintain the properties.

The Cockburn Island project is an opportunity to protect one of the highest priority islands in the Great Lakes. Cockburn Island Council and representatives from the Cockburn Island Sports & Conservation Club have helped shape the property management plan for the land. Locals have expressed interest in collaborating to ensure that the land is both protected and enjoyed.

This conservation project was supported by funding from the Government of Canada, through the Natural Areas Conservation Program (NACP) and the Canada Nature Fund. The project also received funding from generous individuals, foundations and corporations, including the J.A. Woollam Foundation, MapleCross Fund, Rogers Foundation and TD Bank Group.

When it comes to conserving Canada’s most important natural areas, buying land is just the beginning. Stewardship — managing the land for the long term — is at the heart of what we do. Each and every property we protect is monitored and managed, so that the ecosystems are maintained and species thrive — even if that means leaving it be. This can include mapping and removing invasive species, restoring wetlands, grasslands and forests, monitoring for species at risk, planting native species, building trails or installing signage.

Help us care for Cockburn Island

NCC may direct all or a portion of gifts committed to Cockburn Island to NCC’s Stewardship Endowment Fund for Ontario. Revenue generated by the fund provides for long-term management on properties across the province, including those in the Manitoulin Island Archipelago, such as Cockburn Island. In the event that this project becomes fully funded or cannot be carried out, your gift will be allocated to the next urgent priority.

If a U.S. tax deduction could be more advantageous, NCC works in partnership with a registered U.S. charity, American Friends of Canadian Nature, and we would be pleased to explore options with you.