Coming together against a common foe on the Saugeen Bruce Peninsula 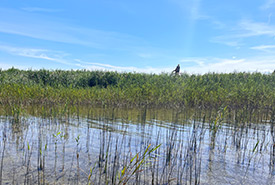 Phragmites control at Oliphant, ON (Photo by NCC)

Oliphant, Ontario, is an area with deeply rooted history. As part of the Saugeen Bruce Peninsula, this area is the traditional and current homelands of The Saugeen Ojibway Nation, comprised of the Chippewas of Nawash Unceded First Nation and the Chippewas of Saugeen. Oliphant is also an important place to the Historic Saugeen Métis. The peninsula is also world-renowned for its diversity of orchids and ferns and is a biodiversity hot spot in the Great Lakes.

However, there are other roots that have made their way onto the landscape — all sprouting from an invasive species that threatens the natural history of this area.

“The Nature Conservancy of Canada (NCC) has been leading invasive species management work across Ontario for over a decade,” says Jacob Kloeze, NCC’s invasive species program coordinator on the Saugeen Bruce Peninsula. “To truly make a large-scale and lasting impact, invasive species control must be completed on a broader landscape scale in collaboration with local communities.” 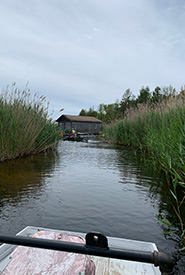 Surveying phragmites in a channel, Fishing Islands, ON (Photo by NCC)

“In Oliphant, a community-led effort to control phragmites has been ongoing for many years,” Jacob shares. “NCC first became involved in this project in 2019 when staff worked together with the Oliphant community to manage phragmites on the ground. With funding from OTF, we were able to further support phragmites control efforts in Oliphant and across the Saugeen Bruce Peninsula for the past three years.”

The peninsula supports many unique natural areas, including the incredible cliffs of the Niagara Escarpment, which rise 120 metres above Georgian Bay along its eastern edge, connecting contiguous forests, lakes, wetlands, rivers and streams. To maintain these areas and the unique species that use them, it is critical that these areas are protected from the threat posed by invasive species.

According to Jacob, the battle to manage phragmites in Oliphant and the nearby Fishing Islands was initiated by a group of local community members who noticed the area was being heavily consumed by the invasive species. In 2017, the Oliphant and Fishing Islands Phragmites Community Group (OFIPCG) was formed by Leslie Wood to tackle the ever-growing issue of phragmites along the Oliphant shoreline and among the Fishing Islands. In 2021 alone, more than 52 volunteers, aged seven to over 70, contributed to phragmites control efforts with OFIPCG through manual and mechanical pulling, as well as providing and operating equipment such as boats, barges and mini-excavators. 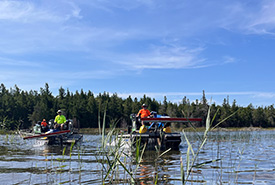 Phragmites control: By cutting the stalks below water, the plant's oxygen supply is cut off and will drown (Photo by NCC)

To complete large-scale control, NCC worked closely with community volunteers and contractors with specialized equipment designed to work in these remote environments. This effort resulted in over 40 hectares of phragmites controlled in the Oliphant Fishing Islands in 2021 alone, with that number expecting to be closer to 100 hectares by the end of 2022.

Jacob says that NCC will continue working to prevent the spread of invasive species across the Saugeen Bruce Peninsula. This will include control of invasive species on NCC owned and managed lands, as well as the continued support of community-led efforts for phragmites control.

While on-the-ground control efforts are key to controlling the spread of invasive species, so too is raising awareness through outreach and education. 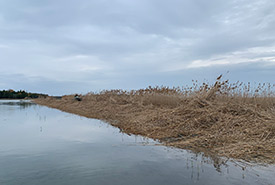