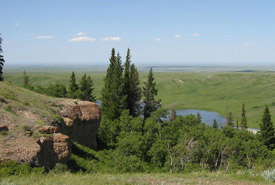 The Cypress Uplands straddle the southern part of Alberta and Saskatchewan and rise more than 600 metres (2,000 feet) above the nearby plains.

The area ranges from mixed grass prairie to boreal forest. It features bench-like plateaus, forested slopes and steep, stark escarpments that are not typical of the prairies.

These varied habitats are home to about 120 plant and animal species rarely found in Canada outside the Rocky Mountain and foothill regions. This area has the highest diversity of bird species in Saskatchewan, and includes: 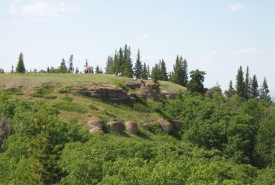 More than 75 per cent of the Cypress Uplands habitat is still intact. Although the area is relatively undeveloped, recent advances in agricultural technology, as well as recreational and industrial development, are becoming more common. Oil and gas exploration, acreage development and a large number of weekend homes are also on the rise.

Close to one-half of the Cypress Uplands area is Crown lands that involves activities such as leased grazing, lands under Wildlife Habitat Protection Act jurisdiction and Indian Reserve lands. Nearby conserved areas include those owned and managed by the Nature Conservancy of Canada (NCC).

NCC is shaping conservation through enhanced awareness, extension and outreach, and through additional partnership development. As part of the Northern Great Plains Conservation Initiative, we are helping support landowners' interests to limit development and keep the natural character of the area.