A breezy hike at Buffalo Pound 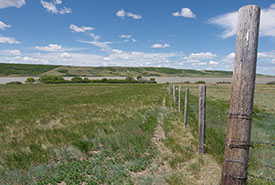 What a delight it was to watch a wary coyote cross the trail in front of me, sizing me up before continuing on its way into a nearby coulee. This encounter may not seem like much, but after three months of staying at home to help stop the spread of COVID-19, a solo walk in nature outside the city was a welcome change of pace.

The brief meeting with the coyote took place close to Buffalo Pound Lake, Saskatchewan, where the Nature Conservancy of Canada (NCC) is in the final lap of fundraising for this project. Its goal is to purchase and protect 866 hectares (2,140 acres) of native grasslands and seven kilometres of shoreline at Buffalo Pound Lake, about an hour’s drive from my home in Regina.

Some background information might help explain why this property purchase is crucial. For people in other parts of Canada, the stereotypical image of Saskatchewan might be a limitless sea of grass, but in reality, the province has lost more than 80 per cent of its native grasslands. What remains — including this area along a stretch of Buffalo Pound — provides critical wildlife habitat, including for species listed under Canada’s Species at Risk Act, such as Sprague’s pipit, bobolink, Baird’s sparrow, American badger and northern leopard frog. 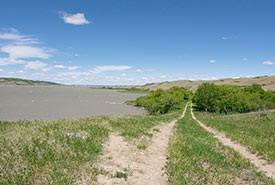 As you would expect, the lake and the beauty of the surrounding valley attracts people seeking to connect with nature; a provincial park and several private resort developments hug the shoreline at the east end of the lake. I have no doubt that development would eventually move west toward the property that NCC seeks to protect.

My hike, while wonderfully invigorating, covered only a small portion of the entire property as shown on the large-scale map I was using. (The land I hiked had been used as pasture, as evidenced by the weathered cow patties here and there). My wildlife encounters were minimal. I dodged a couple of badger holes, and I may have heard a bobolink, although that might have been a trick of the incessant wind, which certainly kept the bugs moving. I have a blurry photo of what iNaturalist tells me may be a yellow flycatcher struggling mightily against the westerly wind to remain on its perch. A return visit to experience a marsh area and to check out the view from the rim of the valley is now on my to-do list.

I make monthly donations to NCC, but when I learned that donations toward the purchase at Buffalo Pound would be matched by an organization called MapleCross Fund, I decided to send a few extra dollars to the cause. If you would like to support the project, learn more at conservegrasslands.ca.