A novice’s guide to a Christmas Bird Count 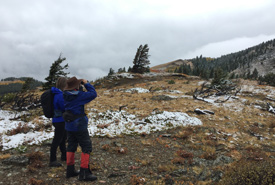 Scientific study and academia can feel a long way away from the everyday lives of most Canadians, but for anyone with a pair of binoculars and a passion for wildlife, there is an opportunity to join in on the largest and longest running citizen science project in North America.

It was with an eye to becoming more involved with the scientific process and contribute to our understanding of Canada’s bird populations that I signed up with a local naturalist group in Brock, Ontario, to take part in the 118th annual Christmas Bird Count. When I woke up on the morning of Sunday, December 30 — the day of the bird count — I had no previous experience spotting, identifying or surveying for birds. By the end of the day, five dedicated birders from the Beaverton Christmas Bird Count had taken me under their wing.

Though I had previously studied wildlife biology at school, my focus had always been small mammals and habitat interaction. My bird identification skills heading into my first ever Christmas Bird Count were, to say the least, novice at best. That didn’t seem to faze Derek, our leader, though. He gave me my first lesson on how to identify the distinctive colouration and extended tail feather of several black-capped chickadees feeding at a backyard bird feeder as we waited for the final member of our four-person team to put their boots on and meet us at the car. 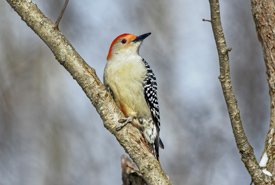 We drove along country laneways, hiked down old service roads and parked beside residential birdfeeders to catch a flash of feathers or the silhouette of a bird perched atop a grain silo or house. Eventually, someone called out “cardinal,” then “blue jay,” then “red-bellied woodpecker!” As I jotted down each new species, Derek kindly explained that a woodpecker's red crown (not its belly) distinguishes it from the downy or hairy woodpeckers that are also found in the area. Before the end of the day, I would have a chance to identify and compare each of these species.

As we completed the outer circuit of our survey area, we chatted about what species we would like to catch a glimpse of, and where to look. Perhaps a snow bunting (keep an eye on any open farmers’ fields where they might be foraging), or a red-tailed hawk (watch the hedgerows and perimeter trees as they scan for prey across open fields) or the elusive snowy owl (they like to perch on elevated ground). This new-found information was quickly rewarded as a flock of 100 snow buntings flew from an open field to land on the side of the road beside our vehicle, lifting everyone’s spirits and causing our driver to swerve over to the shoulder so we could take count. 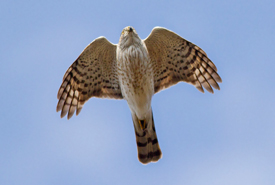 Just before lunch, we linked up with a couple taking part in the Beaverton count from a separate vehicle. We were comparing notes and swapping species when I caught a flash of movement out of the corner of my eye. Some large bird had just dived down behind a nearby grain silo, sending a flock of rock pigeons scattering into the air.

“Hawk!” I announced. It didn’t take long before the questions came: “Are you sure?” “What kind of hawk?” “How big was it?” To my relief the bird flew up again, and it wasn’t long before my fellow birders all had a good look at it. Someone thought it was a sharp-shin, but another thought it was too small, so must be a Cooper’s hawk. With that, I reached for my field guide.

Scouring through the pages as quickly as I could, I looked up and noticed the bird had perched on a tree across the road. As my fellow birders debated, I flipped back and forth between the descriptions and images of both species. It was only as the bird flew off that we were able to see the squared tail feathers that positively identified it as a sharp-shinned hawk.

After the flurry of excitement and a well-earned grilled-cheese sandwich during our lunch break, we hopped back into the car and headed off to fill in the gaps left in our survey area. Spotting a number of smaller bird species, we finished the day with a hike along the Beaver River Wetland Trail. During the hike, I spotted tracks leading across the path and into a stand of cedar trees. Suddenly a flood of memories came back to me, and I remembered chasing grouse with my father at our cottage when I was a young boy. Standing still in the dense cedar, I kept my eyes open as Derek imitated the bird’s call in an attempt to get a response. Unfortunately, since we didn’t hear or see the bird, we concluded that while the prints were almost certainly those of a ruffed grouse, we couldn’t add that species to our tally. 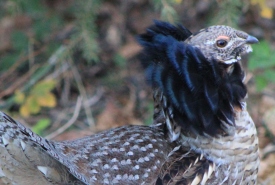 And this was how my first experience with the Christmas Bird Count and my first dip into birding ended. While it may have been intimidating at first to walk into a group of experienced birdwatchers with little to no real bird identification experience, I found that the people who greeted me were more than willing to accept me and pass along their skills and expertise. The group took the time to teach me identification skills that I will now be able to build upon whenever I am outside observing nature. And I can promise you that I will be back next year for the 2019 Christmas Bird Count to have another look for that grouse.

If you would like to try your hand at learning bird identification skills, you just have to pick up a bird identification guide, download a helpful app (I recommend Merlin Bird ID) or contact your local naturalist group to get started. With the Great Backyard Bird Count just around the corner (February 15–19, 2019), this is an ideal opportunity to learn about the birds in your neighbourhood, become a citizen scientist and provide valuable information in a global effort to better understand the health and diversity of birds worldwide!