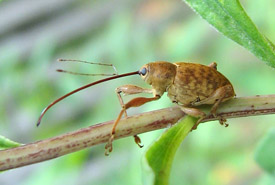 It was late in the afternoon last summer when I decided to relax by reading a book in my backyard gazebo in Winnipeg. As I looked up from my book, I saw a tiny insect, backlit by the sun, fly for a few metres across the yard and then vanish from sight. While I was wondering what it was, and before I could look back down at my book, I saw another insect, larger than the previous and flying slowly. I soon realized that there were many tiny insects flying around me. Normally, I would not have been able to see them, but backlit by the sun, they stood out like silvery points of light, darting, swirling and floating by on the gentle breeze.

I decided to investigate, and so I ran into the house to get my butterfly net. 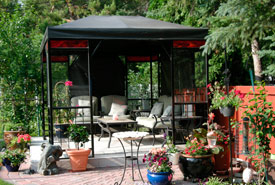 Standing motionless at the edge of the gazebo, like a baseball batter at the plate, I was ready to swing at the next target that flew by. After a couple of misses (the insects were capable of remarkable evasive action!), I finally captured one, but then watched it as it deftly manoeuvred through the mesh of the net and was gone. Obviously the net fabric was too coarse to hold my quarry (most were only a few millimetres long), but having nothing finer at hand, I kept swinging to secure each specimen quickly and without squashing it.

I continued this exercise for a half-hour, capturing about one insect for every 10 tries, until the sun dipped below the roof line of the house and the flying flotilla became invisible to my eyes. At this point, I had no idea what types of insects lay at the bottom of my vial of alcohol I used to store the specimens, and it was not until the following day that I found out.

I glued each one onto a paper “point” attached to an insect pin. When the glue was dry, I peered at the specimens through my stereo-microscope and began identifying them, placing them into families. The following is a list of the insects I captured that afternoon: 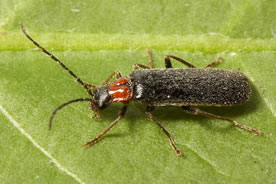 The soldier beetle (native to Europe) had recently invaded Manitoba from Minnesota, and it and another invading species, the variegated lady beetle, were the subject of a paper Sarah Semmler and I published.

I was astonished at the diversity of species in my backyard, all taken within a short period of one afternoon.

I have no doubt that collecting insects periodically from spring to autumn would have easily resulted in several hundred species. I was completely unaware of all this biodiversity of tiny species in my backyard. The rest of the summer, I remained alert for other insects in the garden, and collected the following: 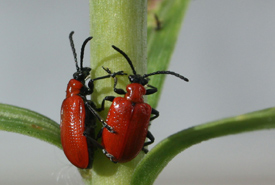 •    Common bagworm moth larval case made of plant fragments and attached to the house.
•    The exotic, dreaded red lily beetle on lilies.
•    A ground beetle on the sidewalk.
•    Predaceous diving beetles that slid off my gazebo roof.
•    An impressive 70-millimetre-long (2.8-inch) black female wasp.
•    A five millimetre currant-tip borer long-horned beetle sitting on a window.
•    A banded long-horned beetle on a flower.
•    An ant-mimic clerid beetle running along a freshly cut white spruce log.
•    Several species of jewel beetle that emerged from oak firewood stored in my garage.
•    A horntail wasp and colourful willow-oak sawfly sitting on my deck.

I now have a nice collection of insects without even leaving my property.

This post originally appeared in the Entomological Society of Manitoba Newsletter. 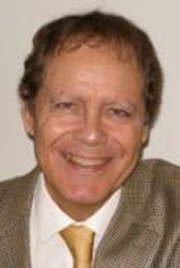