Banding together to protect birds 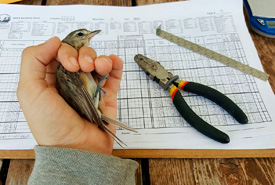 In a previous blog post, I discussed how scientists determine long-term trends in bird populations through annual monitoring. Those estimates provide valuable information about a species, but are limited in their capacity to explain the underlying causes of the trends. While it’s useful to know that a particular species is declining in a specific area, the mechanism underlying the declines often remains unknown. Without an understanding of the cause of the decline, little can be done to reverse it. 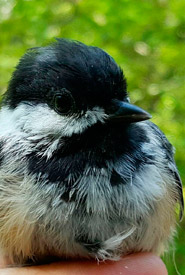 Demographic monitoring provides insight into the various life stages of birds, which may be important factors limiting population growth. Demographic parameters (such as vital rates) often measured in birds include productivity (i.e. are they reproducing?), recruitment (i.e. are new/young birds being incorporated into the main population?) and survival.

In general, migratory birds have three main stages to their annual cycle: summer nesting season, migration and time spent on the wintering or non-breeding grounds. Bird banding is an effective tool that allows scientists to measure the vital rates of multiple bird species across all stages of their annual cycle. 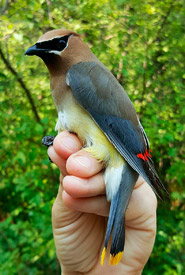 During the summer nesting season, the Monitoring Avian Productivity and Survival (MAPS) program uses bird banding techniques to capture birds and record information related to their age, sex, body condition and reproductive status. The MAPS program began in 1989, and runs surveys annually across the United States and Canada. Since they use standardized protocols, the data produced from the MAPS program are long-term, wide-ranging and robust, making it valuable for answering large-scale questions related to avian demographics and population trends. 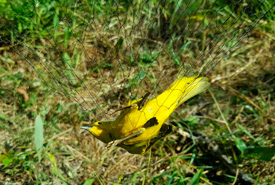 What exactly is bird banding, and what would a morning at a MAPS station typically entail?

Bird banding involves passively capturing birds, usually with a fine mesh net placed in a habitat with lots of bird activity, extracting captured birds from the net and then taking them back to the banding “home base” to be processed.

Processing involves fitting each bird with a numbered, lightweight aluminum leg band and recording information about the bird’s age, sex, body condition and reproductive status. Once all of the data is recorded, the bird is released unharmed. 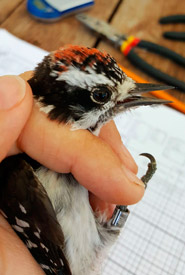 A male downy woodpecker being processed (Photo by NCC)

A typical morning at a MAPS station would involve opening the nets at sunrise, and checking them approximately every 30 to 60 minutes to see if any birds have been captured. The number of nets varies, but an average MAPS station has 10 nets.

Once retrievers arrive at a net that has birds caught in it, they remove them one at a time and each bird is placed in its own “bird bag” for transport back to the banding home base. Bird bags ensure the birds are at a comfortable temperature and are dry and calm while they wait their turn to be banded and measured. The bags are made of lightweight, non-stretchy, light-coloured, breathable fabric. Old, white cotton bedsheets make perfect bird bag material. 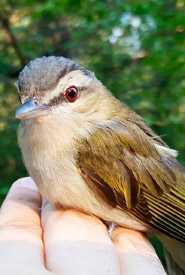 Once back at the home base with the captured birds, the birds are sorted based on which net they were captured in and the bird banders begin processing the birds in the order they were caught (net one birds are first, net two are second, etc.) to reduce the time that the birds are in captivity. Usually, if there are many birds, by the time all the nets are checked and retrievers return to the home base, it’s time to go on another net run to check the nets for birds again.

Meanwhile, the banders remain at the home base and process the birds brought back from the first net run. The number of birds caught in a morning varies with each banding station, time of year and local weather conditions. A busy station may process more than 100 birds in a morning, while a quieter station may only do 20.

The joys of bird banding

It’s always exciting to have birds in your hands and is something that I find never gets old. I’m continually amazed at how much smaller a bird seems when you hold them compared to when you see them sitting in a tree or on a fence post. It’s humbling to consider that the tiny warbler, which weighs only 10 grams, will fly all the way to South America this fall, likely returning next spring to the same area you observed it in this year (and sometimes even be recaptured in the same net it in which it was first caught).

Birds truly are amazing creatures! If you’re interested in bird banding, contact your local bird observatory to see what is happening in your area.