Bear versus caterpillar: A day in the field

In early summer, the Nature Conservancy of Canada (NCC)'s Saskatchewan Region moved offices. As the move didn’t require all staff to help and also limited the in-office work able to be done, this presented a perfect opportunity to have a day of field work. I and my co-worker Ryan Dudragne signed up to do an inspection at NCC’s Elizabeth Hubbard property.

Since we’re both avid birders and involved with the Saskatchewan Breeding Bird Atlas, we decided that this would be a perfect opportunity to do some point counts (bird surveys) for the atlas while in the field. This ambition is all well and good when planning, but it’s a little more difficult to stay motivated when it requires a 4 a.m. start to the day. Such is the life of avian field biologists, one I wouldn’t trade for the world, early start times or not. So off we went, at pre-dawn — a great time to be out driving, as there is almost no traffic. 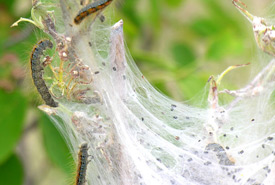 We arrived at the property to find that it was suffering from a massive infestation of tent caterpillars, as is much of the province this year. They were everywhere! Most of the trees were almost completely defoliated. They were even in the grass and on the ground, and standing in one place for any length of time would result in multitudes of caterpillars crawling up your legs. Also, these particular caterpillars create silk that stretches across openings between the trees.

Of course, the point counts we planned to do were 150 metres into the woodland, meaning we would have to venture into the thickest parts of the caterpillar occupation. I braved the silken masses by waving a stick in front of myself as I walked. In addition to caterpillars, there are black bears in the area. So not only was I walking in the woods waving a stick in front of me, I was talking loudly or singing to alert any bears to our presence. I’m sure if anyone happened upon me at that point I would’ve looked quite crazy, if not slightly ridiculous. 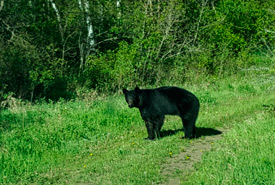 Speaking of bears, we did see one. Fortunately, it was from the safety of the truck. We were driving up the trail to get to the area where our last point counts were located and had stopped just before a turn in the trail to listen for birds.

Peeking out of the bushes was a black bear. As it seemed curious about us and what we were going to do, it came out of the bushes and stared at us for a couple of minutes before running back into the trees. Thankfully, it went off in the opposite direction from where we were headed. 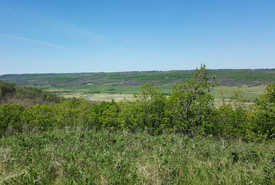 Taking in the view of the Qu’Appelle Valley, SK (Photo by NCC)

We carried on with the rest of our day, which was scorching hot and made worse by the lack of shade from so few leaves on the trees. It was a good day overall, with the bear sighting and the views of the Qu’Appelle Valley. Our day was also productive: we documented 45 species of birds, three species of mammals and numerous plant species. Plus, we mapped the myriad trails that criss-cross the property.

I would highly recommend visiting and taking a stroll here, although maybe wait until the tent caterpillars have dissipated. All in all, it was a very good day in the field.