Beyond the boardwalk at the Garry oak preserve 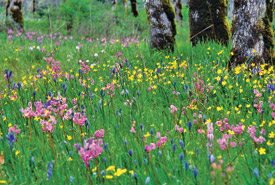 I’ve been wanting to visit the Nature Conservancy of Canada’s (NCC's) Cowichan Garry Oak Preserve since we moved here, but as an endangered ecosystem it’s not open to the general public. We’d wandered the (short) boardwalk that protrudes a few hundred metres into the preserve from Maple Bay Road, but it wasn’t the same as being down in the grass, the gnarled trunks of the oaks winding above you and the scent of wildflowers in the air.

This weekend I finally had a chance to get beyond the boardwalk, as NCC was holding its annual In Bloom Wildflower Festival. This is the one day of the year that the place is open to the public to explore; and do people ever take advantage of it!

The Garry oak ecosystem can be found from the Comox Valley in the north down to the Willamette Valley in Oregon. On Vancouver Island, less than five percent of this ecosystem remains, most of it in isolated and fragmented patches due to agricultural and urban development. This means that the species that live in these ecosystems are also at risk. 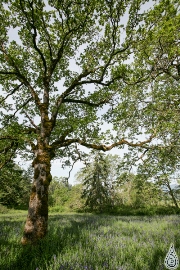 The Cowichan Garry Oak Preserve is a 52-acre (21-hectare) parcel that was purchased by NCC from the Elkington family in 1999, as part of a larger property that the family had owned since 1884. While they’d kept the oak meadow in what they considered a "park-like" state, tree cutting had resulted in some oaks regrowing with five or six shoots instead of a single trunk, and there had been encroachment of invasive species like Scotch broom.

NCC has worked to return the ecosystem to a more "natural" state by introducing wildfire to burn the understorey and provide much-needed nutrients while removing some invasive species, and by relying on volunteers to help remove invasive species by hand. Restoring this Garry oak habitat has also been instrumental in bringing back the western bluebird, which was considered locally extinct for almost 20 years, as the preserve is one of their summer grounds (though this year some of them even decided to stay over winter…). While most of the oaks are 200-250 years old, one is almost 700 years old — a testament to the species' longevity and resilience. 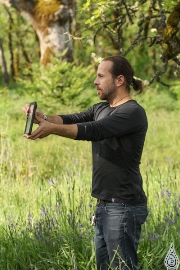 Luckily I’d signed up for an early morning photography workshop with the NCC’s Tim Ennis, so I was able to experience the preserve — and soak up the atmosphere — before the crowds came. Tim is NCC’s west coast program director, and he also also has a passion for photography. Our photography sessions were interspersed with brief discussions about equipment, composition and techniques.

Unfortunately many of the wildflower species native to Garry oak ecosystems had already finished blooming, as spring had come ealier than usual. But there were still lots of camas and other colourful flowers (my flower identification skills are limited!) to make it a worthwhile photography field trip. Plus there was the opportunity to photograph the Elkington farmhouse up close — a place we’d only ever seen from the road. 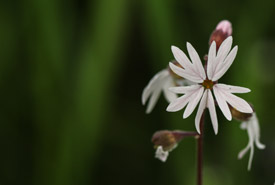 I used my trusty macro lens, to which I’m thoroughly addicted. But I also tried a wide angle lens, in an attempt to learn something new and broaden my horizons (pun intended).

It was a peaceful morning in the sun, focusing on photography and listening to the wind in the grasses and the bees buzzing around the camas flowers...watching puffs of pollen drift off the grass seed heads, and looking at the patterns of the twisted oak trunks against the sky. 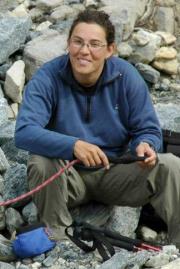 Sarah Boon is the managing editor of www.scienceborealis.ca.