Bird homes: Location is everything 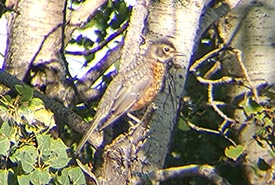 On May 17, Conservation Volunteers helped install 14 nest boxes on the Nature Conservancy of Canada’s Edenwold property in Saskatchewan. These nest boxes were designed with certain species in mind ― tree swallows and mountain bluebirds. Similarly, in April I made and hung five nest tubes for black-capped chickadees (and potentially house wrens) in the aspen stands around my parents’ farm (watch a video with instructions for making these nest tubes here). You may be wondering ― what makes a particular bird house or nest box suited for one species over another? Although it may seem that I’m simply “picking favourites,” the answer is actually based on biology and understanding the life history of the species in question.

Who’s in the hole? 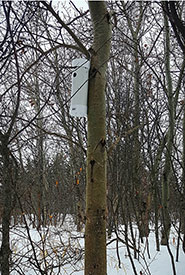 For any bird species to use a nest box, it must be a species that already builds its nest in a cavity (aka a cavity nester). Cavity nesters use the holes in trees, often created by woodpeckers, as a cozy spot to build their nest and raise their chicks. Cavity nesting species will also use artificial cavities, such as nest boxes.

The size of the entrance hole on a nest box will determine which species are able to use the nest box. For example, my chickadee tubes have an entrance hole that is too small for many larger species to fit through.

Where the nest box is placed will also have a bearing on the species that are likely to use it, because each species has a preferred habitat in which it nests. For example, nest boxes placed on fence posts adjacent to an open, grassy area are likely to attract mountain bluebirds and tree swallows. 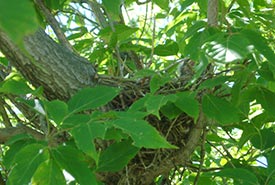 When you think of nesting birds, you likely imagine an American robin with its nest in a tree (or on your downspout or in your hanging flower basket). Robins aren’t particularly fussy about where they place their nests. Many bird species nest with an open cup nest in the branches of a tree. Some examples of open cup nesters that place their nests in trees or shrubs include American goldfinch, eastern and western kingbirds, cedar waxwing and yellow warbler. However, not all open cup nesters build their nests in trees or shrubs. In fact, many species simply build their nest on the ground. I’ve often been met with shock and amazement when discussing ground-nesting songbirds ― but yes, it’s true!

Home on the ground 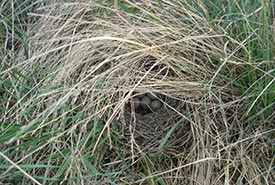 Prior to European settlement, trees were very sparse across the prairies, mostly limited to river valleys and coulees. So really, the only place available for nest building for the many species of grassland birds was on the ground among the grass and forbs. As a result, many bird species native to the northern Great Plains evolved to build their nest on the ground.

Most of the nests of ground-nesting grassland songbirds start with a small scrape or depression, often tucked under a tussock. The birds then construct the nest out of coarse grass and line it with finer grass and soft fibres (e.g. animal hair ― historically bison, now often horse or cow hair). Examples of open cup, ground-nesting songbirds include Sprague’s pipit, vesper sparrow, savannah sparrow and western meadowlark. 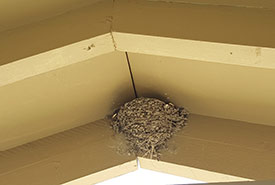 Another interesting type of nest is the mud cup ― this is what barn and cliff swallows build. The nest is often attached to a building or other human-made structure. It is made by the pair of birds collecting mud in their bills and mixing it with some grass to make a little pellet. These pellets are arranged to create a shelf. Then the birds stack the pellets to form the “walls” of the nest. If you’ve ever seen a completed barn or cliff swallow nest, you will realize how much work this type of nest is! Since these nests are so labour-intensive, birds will often reuse the same nests from year to year. They will repair them as needed, rather than starting from scratch. Another species that uses a mud nest is the eastern phoebe.

What you can do to help

If you want to help nesting birds, here are a few things you can do: