Call of the wild: Up close and personal with screech owls in Fernie, BC 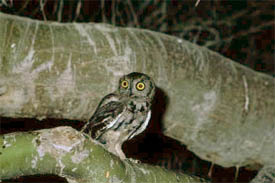 There is nothing more incredible than witnessing a whole family of owls interacting and communicating with one another. This is what I discovered after an intimate and humbling experience with a family of screech-owls in the Elk Valley this past September.

For a little context, let's back up a little to explain how I ended up eavesdropping on an owl family as I spent the night parked on a logging road outside Fernie, BC.

A few month earlier, Earth Rangers had approached the Nature Conservancy of Canada (NCC) about a partnership project researching western screech-owls in the Elk Valley. The western screech owl is a federally endangered species that is found in the lowland valleys of BC’s Southern Interior. With fewer than 500 individuals estimated in Canada and a phenomenal rate of habitat loss, there is an ever-pressing need for a thorough population estimate and habitat inventory.

This is the rationale that led to me setting out into the woods with Jared Hobbs, a renowned owl expert and gifted wildlife photographer. Jared has been studying screech-owls for more than 12 years. He had completed a survey in the adjacent Flathead Valley only two years prior. He was therefore a natural choice for our expert and an excellent field companion. Our goal for the next few days would be to establish survey points for the spring and summer surveys and to train my ears to pick up on the owls’ distinct calls. I had no idea what a humbling experience it would be. 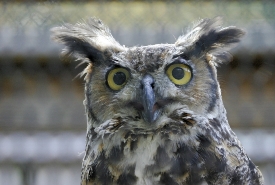 As we prepared for our trip I was really looking forward to getting out in the field and especially looking forward to working with wildlife once again. We headed out to Fernie just after the Labour Day long weekend. Jared wasted no time in finding a pair of great horned owls and a whole family of western screech-owls.

Jared took me to a likely location of a breeding pair, which he had established based on previous surveys. Sure enough, as soon as Jared started his perfect imitation call, we were divebombed by a slightly clueless juvenile who dropped from his perch in sheer excitement at the sounds Jared was making. As the juvenile flew off to compose himself, the female started to defend her territory with what’s known as a “Td” call. The call sounds like a bouncing ball that speeds up and deepens with each “Td.” The female repeated this call a few times before flying off to the edge of the territory and summoning the male back with an “attention getting” call.

Meanwhile the slightly naive and even more adorable juveniles were making sounds of their own, seemingly experimenting with different vocalizations. When the parents returned, the male took over the territorial defence calls. His loud, clear call allowed us to determine that he was behind a screen of trees, just out of sight from our headlights. At this point I was starting to get the picture of different western screech-owl vocalizations but I still had much to learn.

Next we wanted to check my hearing range, so Jared and I walked down the moonlit road for about 200 metres, all the while checking to see if I am still picking up the calls. I am happy to say that my ears are still young and capable and that I have not killed my ear drums with over-zealous concerts and loud machinery. My range was surprisingly good, which makes sense considering these owls want to be heard. They were telling us that this is their home and they would appreciate it if we would stop acting like other owls so they can go back to hunting.

We got the message loud and clear and climbed back into the truck to leave them be, but not before it dawned on me how incredible these creatures are. Their vocalizations are as varied and communicative as our own and their family bond and dynamics are an incredible display of dependence and caring. It is easy to love wildlife because they are cute, but to recognize that they, like us, are masters of their own domain is a far deeper appreciation. They deserve our protection and our efforts to conserve large tracts of suitable habitat for them to thrive.

This is why it makes me happy to know that not far from where we heard this family, a 90-square-kilometre property called Mt Broadwood is owned by NCC and contains high quality western screech-owl habitat that will be protected in perpetuity. 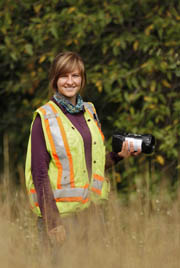 Roslyn Johnson is a stewardship and administrative assistant for NCC's Rocky Mountains Program.