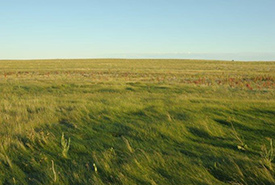 I believe that the best place to start with poetry is nature. (Photo by Mark Taylor)

Since 1999, native prairie grasslands have gotten a little extra attention from the public during Native Prairie Appreciation Week, celebrated in Saskatchewan on the third week of June, thanks to the Saskatchewan Prairie Conservation Action Plan. Native Prairie Appreciation Week is jointly declared by the Ministry of Agriculture and Ministry of Environment as a week to recognize and celebrate the diverse value of native prairie.

On a personal level, native prairie is important to me because it’s a landscape that I’ve become passionate about through my schooling and my career so far. I really love being out in the native prairie environment, and I just find that it is really good for your soul. It’s nice to sit there, and it’s very peaceful. 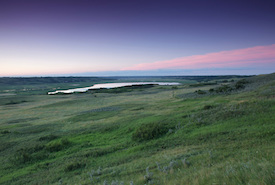 But why should people care about protecting native prairie? Native grasslands are among the most endangered and least protected ecosystems in the world. We’re really lucky that we still have some native grasslands left in Saskatchewan and Canada; however, less than 20 per cent remain in Canada, so it’s really important that we protect what we have left.

Another reason why we should care about native grasslands is that because of the degree of habitat loss, the species that depend on that habitat have also experienced dramatic population declines. For example, grassland songbirds have declined by 80 per cent in the last 30 or 40 years. That’s huge! As a result, many of the species are now considered at risk and in need of extra protection.

My favourite things to see when I go onto a patch of native prairie grassland are the birds that you can’t find anywhere else in the world! Species like Sprague's pipit and chestnut-collared longspur are always super cool to see. I also really love looking for wildflowers. There are lots of plants there that are specialized for that specific habitat. So, I spend half of my time looking at the sky for birds and the other half on the ground looking at wildflowers.

One of the common misconceptions that people have about native grasslands is that they’re just grass. And that’s true; they are composed of many different species of grass. They also have many different species of wildflowers, as well as some shrubs, and there’s a whole range of diverse plants that grow around the wetlands. So it’s a very diverse habitat for a whole host of different species. Another misconception is that native grasslands are completely flat, and parts of them are. But there’s also a lot of undulating and rolling terrain as well as quite steep hills, so it can make for quite the hike in certain landscapes.

How you can help to conserve native prairie grasslands

Here are three things that you can do to conserve native prairie grasslands:

There are many reasons to appreciate our native prairies. Many of my fond memories I have of being in native grassland are of the sunrises. My background is in songbird research and I’ve had a lot of early mornings doing surveys, which usually start half an hour before dawn. I’ve seen a lot of sunrises on native grassland and they’re gorgeous! I highly recommend getting up early one morning to see one. This is why I’m passionate about conserving this endangered ecosystem and the species that live within it.