Get to know one of Canada’s rarest snakes 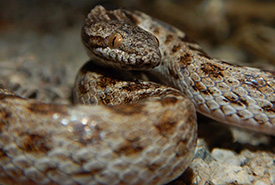 Working at the Nature Conservancy of Canada (NCC) has taught me many things, including the fact that many people are infatuated with snakes. Whether people are afraid of them, invested in protecting their habitats or enjoy learning about what makes them special, the human interest that surrounds snakes never ceases to amaze me.

One species seems to always steal the show during conversations about snakes. It also happens to be one of the rarest snake species in Canada: the desert nightsnake.

In Canada, the desert nightsnake is found only in the south Okanagan and lower Similkameen valleys of BC. Mostly active at night, this species is hard to spot, as it lives in grassy and shrubby areas and often spends time in crevasses deep within rocky outcrops.

The desert nightsnake’s elusiveness is part of its appeal, and not much is known about this species in Canada. For example, little is known about its breeding and nesting habits, as it is active at night and sleeps during the day. However, nest evidence shows that this species is oviparous (its offspring develop in laid eggs) and that females lay between two to nine eggs. 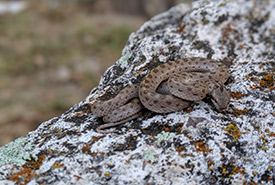 The desert nightsnake’s elusiveness is part of its appeal. (Photo by Heather L. Bateman CC BY-NC)

Although the desert nightsnake is not a danger to humans, it is still mildly venomous and uses its venom to capture small reptiles, mammals and amphibians to eat. When threatened, it may flatten its head and coil its body. This behaviour is meant to mimic that of a rattlesnake, making the desert nightsnake appear more dangerous to a predator.

It is estimated that there are fewer than 200 mature individuals in the south Okanagan and lower Similkameen valleys. These areas are home to many species, as well as the fastest-growing human populations in the province. Over 50 per cent of the natural landscape in this area has been lost or compromised due to human development. Urbanization, expansion of vineyards and road construction have significantly impacted desert nightsnake habitat. 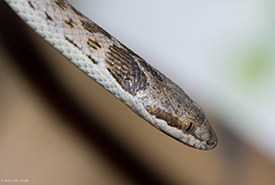 Although the desert nightsnake is not a danger to humans, it is still mildly venomous. (Photo by Ken-ichi Ueda CC BY-NC)

Due to the desert nightsnake’s small population and limited distribution in fragile habitats, the Committee on the Status of Endangered Wildlife in Canada has classified this species as endangered. 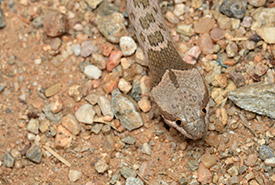 The Committee on the Status of Endangered Wildlife in Canada has classified the desert nightsnake as endangered. (Photo by Robby Deans CC BY-NC)

Although it doesn’t have a flashy appearance, with its pale grey, beige or lightly coloured smooth scales, the desert nightsnake stands out from the crowd because of its rarity.

There has never been a more important time than now to conserve areas for Canada’s reptiles, regardless of whether you’re a snake enthusiast or a little creeped out by them. The only thing to be afraid of here, though, is the possibility that this snake may become extirpated (locally extinct) from Canada. Habitat protection and land conservation are the best ways to ensure species like desert nightsnake have places to flourish.

Let’s turn the lights on this species, so that it can continue to slither into the night.