Down by the Maitland 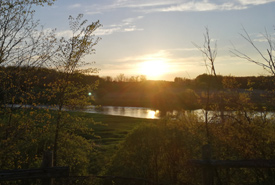 Being in an office and getting the feel for the business side of working with the Nature Conservancy of Canada (NCC) is what many new conservation technician interns experience when they first start their contracts. While this is an important part of the internship, I was tossed right into the grind of everyday field work. I started with a trip over to the west side of Ontario in Huron County, home to one of many counties that share the grand Maitland River. 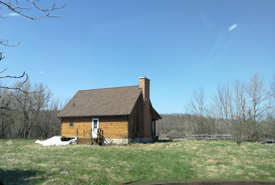 When I learned that we would be staying in a cabin along the Maitland River, I wasn’t sure what to expect. Vince Deschamps, NCC's mid-western Ontario program director, warned me that the basement was like something from a horror movie. So before I arrived at the cabin with Kaitlin Richardson, one of two NCC conservation biologists for mid-western Ontario, I was not imagining a cozy little cabin. However, upon arrival, I realized that it was the nicest two-person cabin I had ever set foot in. What I didn’t expect was that this little cabin would be home to many evenings sitting by our new homemade fire pit, where we listened to screech owl and coyote calls. My exact words to Kaitlin were, “Can I retire here now?” Did I mention the cute little eastern phoebe nest on the back porch? 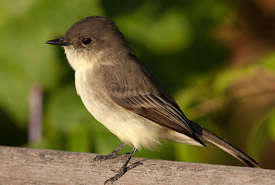 Growing up in the Greater Toronto Area (GTA), the only Great Lake I had seen was Lake Ontario, so of course the memory I have of my first time seeing Lake Huron still replays in my mind. Driving into Goderich from Bluewater Highway Bridge, I was temporarily blinded by the afternoon sun’s reflection on the water’s surface. For a split second, my thoughts went silent as I stared in awe at the landscape in front of me. As the voices of the four other NCC staff in the vehicle crept back into my consciousness, I made sure that I kept my gaping mouth closed and my eyes on the road.

I wasn’t aware, at the time, that over the next few days I would experience many other firsts. With the help from the Huron Stewardship Council, I spent one morning walking on a Lake Huron beach, conducting snake surveys. Following that, I spent a whole day surveying in and along the shoreline of the Maitland River, looking for other elusive reptiles that I never thought I would see, but did!

Being immersed in these experiences has given me the opportunity to meet many dedicated individuals who spend countless hours on restoration projects around the county in hopes of bringing back native species into the thriving Maitland River system. Although I was only in this position for 16 weeks, I can’t help but feel like I’ve seen and heard everything that I was hoping to through my summer with NCC. My only wish now is to keep gaining new skills and be constantly surprised by memorable and exciting experiences.

The Conservation Internship program is funded in part by the Government of Canada's Summer Work Experience Program. 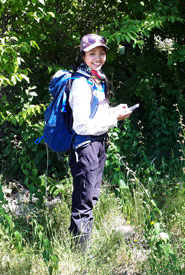 Lily Vuong Lily became a part of the Nature Conservancy of Canada team as a conservation technician intern in May 2018. Growing up in Mississauga, Lily was constantly looking for an excuse to leave the big city to immerse herself in the natural environment that surrounded her.