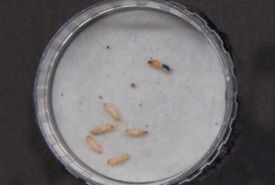 Watching a termite farm through a glass aquarium is fascinating, as you peer into the life of a mysterious species whose activities are normally hidden from view. Workers can be seen excavating tunnels, using their jaws to move soil grain by grain. Each termite worker is small, delicate and soft-bodied, yet is formidable and impressive as part of its larger colony. A colony can build hundreds of intersecting tunnels connecting numerous food sources within an hour. In the field, a colony containing thousands to millions of termites — made up of workers, soldiers and reproductives — can extend across several city blocks.

As part of my master’s thesis, I sought to find out more about the hidden world of the eastern subterranean termite. Although termites are often associated with building impressive above-ground mounds, these structures are limited to tropical species. Subterranean termites live, feed and nest underground, building extensive networks of foraging tunnels that connect feeding and nesting sites. Colonies are constantly mobile as they search for food sources, such as decaying roots or logs. 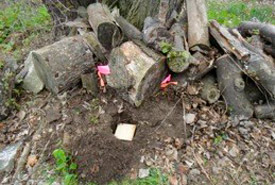 To collect termites, traps consisting of a cardboard roll and plywood lid were buried in areas of active termite activity and re-checked after two weeks. The above photo shows a trap set in an old woodpile beside NCC's Ivey Research Station. (Photo by Vicki Simkovic)

The eastern subterranean termite, once native to the eastern United States, now has a worldwide distribution and is the most common and widespread termite in North America. Scattered populations are also found in several urban municipalities in southern Ontario, where it was introduced on three separate events.

Typically, social insects such as termites defend their nests from both intraspecific (unrelated members from neighbouring nests) and interspecific (different species, such as ants) intruders. Defences can include overt aggression, such as biting, lunging and stinging and releasing noxious substances, or can be more subtle, such as avoiding building overlapping foraging trails or blocking tunnel entrances. 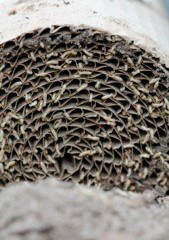 However, in introduced areas, some termite species can form supercolonies, where there is a lack of aggression between neighbouring nests, a free exchange of workers and reproductives, and interconnected populations that extend over a wide geographic range.

It is thought that the effects of introduction may result in behaviour changes, and that neighbouring colonies lose their aggressiveness and may even lose the ability to distinguish kin from non-kin.

Colonies from southern Ontario (in this case, Toronto colonies) have characteristics suggestive of supercolonies, such as lack of aggression between colonies and expansive colony sizes. In contrast, populations found in southwestern Ontario (Point Pelee National Park and Pelee Island), which arose from a separate introduction event, are more diverse genetically than Toronto populations. 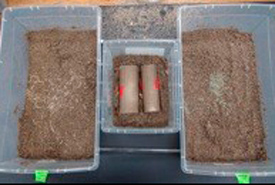 I was interested in determining whether colonies in southern Ontario would display aggressive or more subtle defenses toward unrelated colonies, and if they maintained their ability to discriminate kin from non-kin. To test this, I collected termites from the field using cardboard traps, and placed worker or soldier termites that were either from the same or different colony (Toronto vs Pelee Island) in a Petri dish to see if there were signs of aggression over a five-minute period. Overall, there was no evidence of aggression between the two colonies, which would suggest a breakdown in kin discrimination.

The results showed that it is likely that eastern subterranean termites are generally a passive species that avoids aggression, but certain individual workers may occasionally express aggression where foraging tunnels intersect. There is still much to explore about the behaviour of this mysterious and fascinating insect species, and I can’t wait to uncover more! 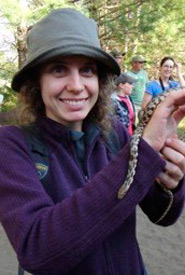 Vicki Simkovic recently completed her masters of science at the University of Western Ontario.