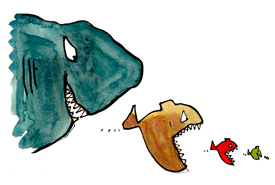 My favourite holiday memory is learning to make mashed potatoes in my grandma’s kitchen, her hand gently clasping mine as I firmly squished down into a large yellow bowl using an old wooden-handled masher. I recall the way she recited the intricate family recipe, laced with table cream, a pinch of salt and the secret ingredient that has kept the mashed creation a must-have on our holiday table.

Learning how to make these potatoes felt like an initiation of sorts, one almost every female member of my family has gone through, and no holiday meal is truly complete without this dish. 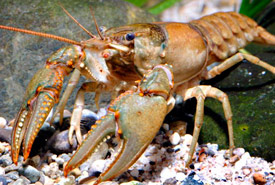 Carefully prepared meals are often a quintessential part of the holidays, but more than that, food structures human lives into three parts: breakfast, lunch and dinner. There are copious articles telling us what we should and shouldn’t eat, the newest recipes to try and what foods to eat to lose weight.

But what if eating was as simple as consuming whatever happened to swim by?

Although our finned friends are as dependent on food as humans are, they’re not nearly as picky.

What a fish consumes boils down to their species, size and region. Larger fish, such as the anadromous salmon, tend to munch on smaller saltwater species like herring, who in turn opt for zooplankton and krill.

While other large freshwater fish such as trout will snack primarily on insects and smaller fish, sometimes what a fish eats is simply what it can fit in its mouth.

Largemouth bass have been known to consume an interesting array of things, ranging from the typical crayfish to the odd small bird or two. This species is known to eat frogs, leeches, snakes and even small mammals. 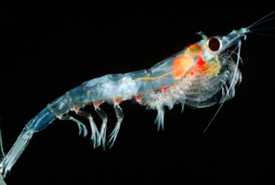 Food availability and competition in an area also play a role in what a species may eat. Habitat degradation and pollution can negatively impact what’s on the menu, often altering aquatic "food webs" by forcing species to opt for different food sources. With the introduction of invasive species such as round goby in many watersheds across Canada, sometimes getting a sufficient bite to eat is harder than simply chomping down on whatever floats a fish’s way.

Round goby compete directly with other bottom-dwelling fish, not only eating similar prey but sometimes even preying on smaller fish, such as darters and logperch. By reducing the availability of food for native species, round goby over-populate areas by dwindling the numbers of species, including northern madtom and eastern sand darter. Gobies will also intrude into the nests of native species and snack on their eggs. This prevents any offspring from hatching, impacting the life cycle of a native species and contributes to the decrease in population.

In the wake of the growing number of invasive species like the round goby, food has never been more important to native species. Fish need this sustenance for their development so they can reproduce, which helps keep populations of native species afloat.

Food plays an important part in every species’ life. From humans to fish, from a bowl of creamy mashed potatoes to a school of plankton, food is the one thing we can all sink our teeth into.