Heard it from a Scout: Discovering the winter night sky 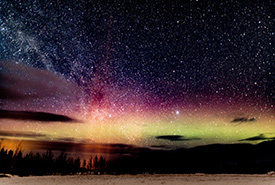 One of my most relevant memories during my Scouting years happened at a winter camp in E. C. Manning Provincial Park in BC on a frigid February night. Our patrol was made up of a group of eight Scouts, between 11 and 13 years old, camping in a valley with snow up to our knees.

One of our Scouters led an astronomy activity, helping us locate bright winter constellations that are highest in the sky in winter, such as Ursa Major (Big Dipper), Ursa Minor (Little Dipper), Polaris (the North Star), Orion, Cassiopeia and the Pleiades. This trip sparked my curiosity for space. 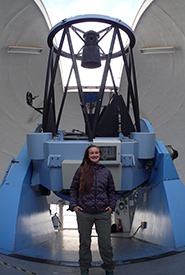 Fast forward 10 years and I am now studying observational astrophysics and spending many nights as an astronomy research assistant at the Simon Fraser University Trottier Observatory. Exploring the skies is incredibly satisfying, and you don’t even need a telescope to see some of the most beautiful happenings. While summer may be more comfortable for stargazing, the winter season offers the longest nights for observing, and there are plenty of winter sights to watch out for.

Between November and February, the popular winter constellation, Orion the Hunter, is visible from the Northern Hemisphere. By looking closely at this constellation, the blue supergiant star, Rigel, and the red supergiant, Betelgeuse, are both visible. Rigel is the brightest star in the Orion constellation and Betelgeuse is the distinctly red star. Both of these stars are predicted to erupt into supernovae within the next 100 million years. 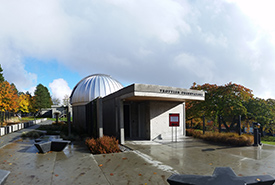 From January until April, you can observe Mars, Saturn and Jupiter in the early morning. One key thing to remember when searching for planets in the night sky is that stars twinkle while planets do not. You can observe all three of these planets in the sky at the same time, from February 20 to 29 at around 4:30 a.m. (PST). Second to the moon, Jupiter will be the brightest object in the sky during this time and will be in the southern direction in the early mornings of late February. To find Mars, look for a red speck in the south-southeastern direction. Saturn is dimmer than Jupiter and looks like a white speck, making it difficult to differentiate from a star. To find Saturn in the southeastern direction, consider using a mobile sky map application like Google Sky.

Keep an eye out for these planets and stars next time you’re under a clear winter sky. Of course, there are online resources to help you prepare for your stargazing trips. As an avid astronomer and life-long stargazer, I’ve put together my preferred (and free) resources to guide you on your expedition of the skies. The next time you want to escape the city's light pollution, consider using some these websites to add another dimension to your celestial experience:

Each segment of the weekly online Star Gazers series announces celestial events happening in the Northern Hemisphere, which can all be seen without a telescope.

The best part about meteor showers is that you don’t need a telescope to enjoy them. This website provides a comprehensive list of meteor showers.

Visit this website to find out when the next lunar and solar eclipses are.

This free astronomy desktop program allows you to see how the sky appears at specific times and locations. The mobile version can also help you identify the objects you see while observing the night sky live.

The television series, Cosmos: A Spacetime Odyssey, narrated by the famous astrophysicist and author Neil deGrasse Tyson, does a phenomenal job of engaging audiences through detailed graphics and storylines. The 2014 version is currently available on Netflix.

The winter sky offers many beautiful sights. With the right gear, it can be a comfortable and enjoyable experience. Stargazing is a hands-on way to engage youth in astronomy and physics. We often have big questions about what exists beyond our world, and learning about astronomy through stargazing and online resources can fuel that curiosity.

"Heard it from a Scout" is written by members of Scouts Canada’s Youth Spokesperson program. This post was authored by Sarah Savić Kallesøe.