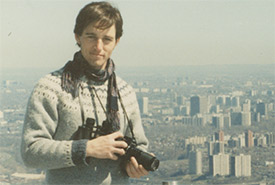 Making the most of the COVID-19 lockdown has meant finally doing some of those “if I only had the time” tasks. Photo sorting and scanning is one of those things for me. It also can mean trying things you never thought you would ever do. Like birdwatching from apartment balconies. I was just skimming through old family photos that my daughter had been scanning when one image brought that to mind.

It was April 1986 and a much younger me was standing on top of the main pod of the CN Tower — outside, in the open air — binoculars dangling from my neck. I was first struck by the amount of dark hair on that lad’s head; then I recalled what had got me there: a search for the common loon, and a fortunate lack of perspective, just a few years before that.

Back in the 1980s, I was doing some volunteer work with the Long Point Bird Observatory in southwestern Ontario. A budding biologist, I was getting crash courses in bird identification, banding and citizen science monitoring. I had never been so immersed in natural history. It was awesome. 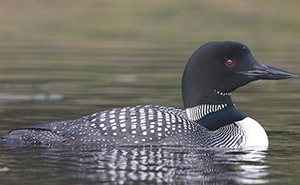 One research project that really grabbed me was the Ontario Loon Migration Watch. Every spring, volunteers stationed themselves along the north shores of Lake Erie and Lake Ontario, awaiting the dawn to count migrating loons. I was amazed. You could actually watch loons — lots of them — without heading to cottage country. 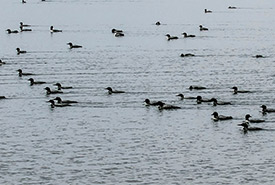 Loons winter off the southern and eastern seaboard of the U.S. and around the Gulf of Mexico. As spring approaches, they gradually fly north, mainly up the Atlantic coast. Once within striking distance, they make a one-day flight to the lower Great Lakes to feed and rest. Then, weather permitting and when so inclined, the birds fly farther north. They lift off around dawn, and head toward the ice-free waters of Canada’s lake country.

I believe the watch was first organized by Durham Region birder Robert Nisbet, who discovered the mass migration in the mid-1970s while on his morning birding walks around Whitby. The large black-and-white birds were easy to spot as they flew by singly or in loose, small groups, not too far overhead. From April through May, he counted thousands of loons passing a single viewing spot. Sometimes, hundreds passed in a single hour. He noted that loons fly by mostly between 6 a.m. and 8 a.m. and that the flight was across a broad front all along the lakeshore.

Eventually I moved to Toronto and during my first spring, I decided to try my own loon watch. It was the end of April when I first breathlessly biked down to the chilly shoreline, packing a large Tim Horton’s coffee and apple fritter. I positioned myself at the edge of a shoreline parking lot and waited. Next thing I knew, a loon flew by, and another and another. It was thrilling to see this bird of the wilderness fly right up Bathurst Street past the few scattered high-rises in the area. I was instantly hooked. 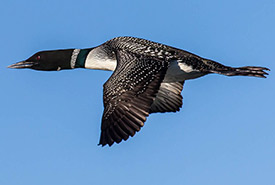 When one seemed to fly right by the restaurant windows of the CN Tower I thought “That’s cool.” And then I got the idea: I should write a story about this urban loon migration! I had recently done some freelance writing about loons and how they were in peril because of acid rain and other threats. Long story short, I got the okay to write an article for the (now-defunct) Toronto Journal, after I said I could get some great shots of the birds from the CN Tower. Acting all journalist-like, I contacted the media relations staffer at the CN Tower to ask if we could get morning access to the tower windows to capture these amazing photos. Fortunately, the staffer also had a soft spot for loons — she loved watching them at her family cottage — and said sure.

I invited a photographer friend, another Mark, to join me. He agreed and even rented some equipment for the shoot. The next morning, we rode the elevator to the main pod level. The friendly staffer greeted us and ushered us, not to the restaurant, but to “the spot where the photographers go.” She guided us through a maze of concrete tunnels and staircases and then opened a metal door. To the outside! We both caught our breath as the air rushed in, glanced at each other and stepped onto the top of the pod. “Take all the time you need,” she said, and closed the door. Several adrenalin-pumped moments and wide-eyed looks later, we settled down and started our loon watch. It was a perfect day for it — sunny, clear skies and not much wind.

But, after many long minutes…there were no loons.

The other Mark busied himself taking panoramic shots from this once-in-a-lifetime view while I fretted about my lack of birds. Finally, I saw some; three specks flying north about 300 metres below. Then I saw the parking lot where I first spotted the “high-flying” loons. And it hit me — I had seen the loons in the line of sight of the main pod of the tower, but they were only about 75 to 100 metres above the ground.

Loons can and do migrate at great heights, but at dawn along the lakeshore they are just gaining altitude. So, the loons are fairly close to the ground and easy to see, even with the naked eye.

The journal did publish the article, and I shared a copy with the CN Tower staffer, minus the Pulitzer-winning photos. 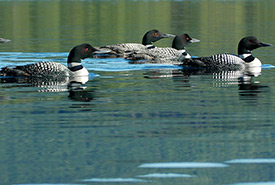 As I sat remembering that day, I realized it was already late April, and that the loons were again on the move. And now there are thousands upon thousands of locked-down high-rise dwellers in Toronto and beyond who might have a chance to spot these birds from the perfect vantage point.

If you are stuck at home and have a view of the lakeshore, why not pour yourself a hot beverage and scan for loons around sunrise? It’s getting towards the end of the migration now, but you just might see some. Or ask friends who live in those highrises. The original loon watch is not running anymore, but you can still watch the north shore of Lake Ontario (and lakes Erie and Simcoe for that matter) to try out a loon watch of your own. With COVID-19, we could have a veritable army of loon spotters.

To learn more about the loon migration and how to recognize the bird, CJRU The Scope at Ryerson University has an informative talk with a member of the Toronto Field Naturalists. Watch for large fast-flying birds travelling singly or in twos or threes, and with their head down, in contrast to the more head-up look of the increasingly common cormorant.

You may be in lockdown, but now you just might have a bird's-eye view of one of Canada’s most iconic birds. And maybe you can finally get that elusive great photo for me.

This article was first posted on Ontario Nature's website and is reposted with permission.