Hummingbirds: The forgotten pollinator when it comes to pesticides 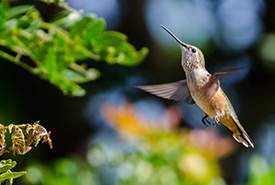 When life is leaping forth in its freshest tender green and shrubs are casting their best wine-rich blooms of colour, there comes a humming. Not just from the song of spring rising in the world, but from wing beats — 52 to 62 per second.

Christine Bishop, PhD, a research scientist with Environment and Climate Change Canada, is working with colleagues to find out whether neonicotinoids (“neonics”), the class of insecticides often blamed for harming bees, may be negatively affecting hummingbirds as well, specifically rufous hummingbirds. 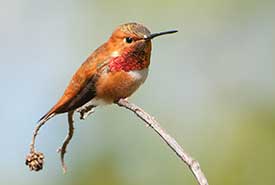 When asked why this is, Christine offered a couple of possibilities. She said that the technology needed to detect extremely small amounts of pesticides has only existed for one to two decades. In addition, hummingbirds are nectarivores (they primarily consume nectar). Pesticide exposure via nectar was not considered a significant route of exposure before the development of neonicotinoids in the 1990s. Neonics are water-soluble and act systemically, meaning they are taken up by the entire plant and are present in all of the plant’s tissues, including its pollen and nectar.

Christine first considered whether pesticides might be a factor in the decline of rufous hummingbirds in the spring of 2014. She was walking near a park that borders blueberry fields and saw many hummingbirds performing their courtship display. She knew they would be nesting nearby and began to wonder if they were being exposed to the agrichemicals used in blueberry production.

She shared her thoughts with her collaborator, Alison J. Moran, a seasoned bird bander. Alison mentioned that when hummingbirds are banded, they often urinate. She wondered if they could collect hummingbird excretions and measure the birds’ exposure to pesticides through them. That fruitful conversation led to what has become a multi-year study.

In the first two years of their study, the researchers detected three neonicotinoid insecticides in rufous and Anna’s hummingbird urine: imidacloprid, thiamethoxam and clothianidin. They also collected bumble bees and their pollen, as well as blueberry leaves and flowers, to test for pesticides. 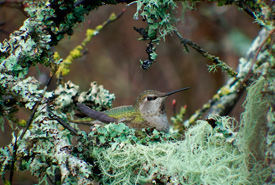 In one of six blueberry flower samples, the researchers detected imidacloprid even a year after its application. This means that hummingbirds could be exposed to imidacloprid from a flower that was not directly sprayed with pesticides. Because pesticide exposure in hummingbirds has never been studied before, researchers can only speculate about the potential health effects of these exposures, based on studies of other species.

You can help pollinators

In the meantime, you can help make a safer home for all pollinators by planting native plants purchased from nurseries that don’t use neonics, avoiding pesticide use around your home and purchasing food grown without pesticides, as migrating birds often follow the valleys where agriculture is prominent.

Whether you’re admiring them from afar or feeding them year-round, hummingbirds are not only a delight for the soul, they’re essential. They are prized pollinators pulsing with life. 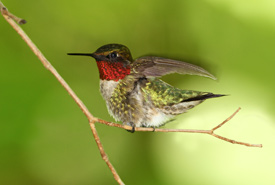 When I asked Christine what it feels like to hold a hummingbird, she said, “I’ve held a lot of wildlife in my life.” My heart sank, as I’d hoped she would express something as magical as I had imagined, but then she continued, “It feels like vibrating energy in your hand. You have to respect that and be awed by it.”

She then reminded me that these tiny birds travel thousands of miles, sometimes migrating from Canada to Mexico and back more than once in their lifetime.

This article was written by Lené Gary, general science co-editor at Science Borealis, and originally appeared on the Science Borealis blog. To read the full version of the article, click here.