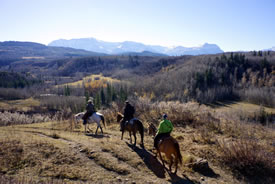 I call it "nature’s parallel universe": it’s my definition for all of the natural occurrences happening all around us, every day. The chickadees’ pecking order of dominance at the winter bird feeder; the peeper frogs calling in the early spring; the spotted sandpiper with its ping-pong ball-sized chicks searching the river’s edge in mid-summer for insect life. It’s a recognition and acknowledgement that alongside of our busy lives, nature is doing its thing.

It’s really just a matter of training oneself to tune into this parallel universe. A unique example is the beaver I filmed a few years ago on the Bow River, during a classic February Chinook. The video went viral, and I like to think that perhaps it has made the one million viewers pause and think, not only about beavers, but about the wonder that surrounds us, even in the city.

How can we ensure that there are opportunities for Albertans to gain an insight into this universe? Part of the plan needs to be an assurance that some of the wild we are still blessed with in Alberta doesn’t disappear. Enter the Nature Conservancy of Canada (NCC).

In late October of last year, two NCC employees, Larry Simpson and Jenel Bode, invited my wife and I on a southwest Alberta tour for two days. The objective? To see some of the important conservation work that the Nature Conservancy of Canada has been focusing on for the past two decades. As a land trust organization, NCC works to create win-win deals with landowners to ensure that the wild integrity of land is never altered.

Under an ideal blue sky, with warm fall weather luring us southward, we headed down Highway 2 and arrived at Five Mile Ranch in the southeast corner of the Porcupine Hills by mid-morning. Here we met up with landowners Ray and Dianne Nadeau, and over tea and coffee, heard about their involvement with NCC from a rancher’s perspective. They live in a profoundly beautiful area, and have stories of frequent wildlife sightings of wandering grizzly bears, elk and deer. Their sense of satisfaction was palpable. Having worked with Larry and Jenel on the placement of a conservation agreement on their land, they know that the land will never change from its use of ranchland. Ever. The net effect is that it will always be there for the wildlife that has existed since the end of the last glaciation. What a legacy. 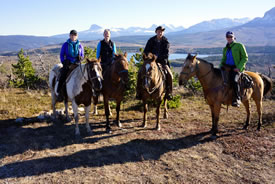 We then headed down to Birdseye Ranch, where we met our horses for a ride into NCC’s Waterton Park Front Project. Our objective was to ride to the top of Birdseye Butte, and on the way there, we explored and experienced some of the most incredible landscapes in all of southern Alberta. It was with great satisfaction that we learned that this property was one of the first successful efforts by NCC to place under a conservation agreement. Birdseye is the gateway to Waterton National Park, and is a buffer zone between the prairie to the east and the Rockies. In the mid 1990s, the threat of development nearly brought an end to the ecological integrity of this important area. 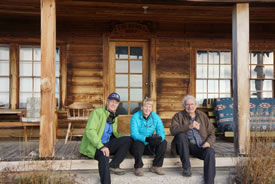 Brian, Dee Keating and Charlie Russell at the Hawksnest, AB (Photo by NCC)

That evening we paid a visit to a small cabin I have been curious about for three decades: the home of the Russell brothers, sons of the famous late rancher/conservationist Andy Russell. In years past, I have admired the Hawk’s Nest, a hilltop home overlooking the prairies, foothills and Waterton skyline. Over pizza and beer, we sat on the porch on a windless evening, discussing how the landscape before us came so close to being changed forever. Now, with satisfaction, the three brothers, Charlie, John and Gordon have nothing but compliments for Larry, Jenel and the NCC team.

Our final day consisted of a back road tour, with the highlight a lunch stop at Hilton and Alta Pharis’s Elkhorn Ranch home, located at the north end of Willow Valley. There were more discussions on the value of ranchland, topped off by a hike up to a viewpoint called Big Rock overlooking the conservation agreement successes to the south. The beauty and ecological importance of this, the last half a percent of what was one of the world’s richest ecosystems, the Great Plains of North America, is still intact, and will now remain so. 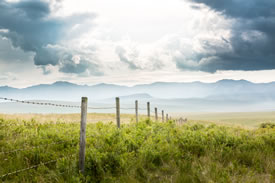 And the final “golden link” in all this? The Waldron Grazing Cooperative: the largest deeded landholding in the Eastern Slopes of Alberta. We drove past the more than 30,500-acre (12,343-hectare) parcel that will be protected, officially and legally, by the latest efforts of NCC and the thousands of supporters across not only Alberta but Canada. A conservation agreement will be in place that will ensure this land remains functioning, vibrant ranchland forever, to be shared, ecologically speaking, with all the wild creatures of the foothills and Rocky Mountains.

The ranching families, supporters and donors who are partnering with NCC in these conservation initiatives understand that rather than being separate from nature, on parallel paths, we are just as much a part of it as the beaver building its dam. They understand that we are sharing habitat with all living creatures.

It’s thanks to these individuals that the conservation of places like the Waldron is possible and nature’s "parallel universe" will now live on, for countless Alberta generations. Talk about a legacy of inspiration.

Brian will be a guest speaker at the upcoming speaker series event in Edmonton on Feb 13. More information

To find out how you can support the Waldron campaign, visit www.conservewaldron.ca. 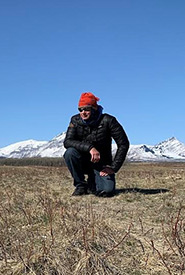 Brian Keating is in high demand as a speaker, presenting on the average at some 50 events a year as a keynote or feature speaker throughout Canada and the U.S. His audiences range from business executives to school children, at major international conferences to small private gatherings. His buoyant, fast-paced and humorous method of presentation is uplifting yet meaningful, and is often commented on as the conference or program event highlight. He and his wife, Dee, live in Calgary, but continue to explore the world, by leading trips to some of the best wilderness locations.