In search of my totem 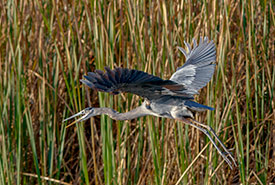 I frequently awaken with pre-set routines and their parameters dancing in my head — actions and reactions caused by billions of neurons sending and receiving electrochemical signals to and from my brain. Whether stretching and slowly becoming mobile or leaping out of bed, the day’s comforts and uncertainties have been preceded by a visual image of daybreak.

As a wildlife photographer, I often find myself in that twilight period between dawn and daybreak, when I can see the sky becoming illuminated by reflected sunlight. Even though the sun has not made its appearance, it’s a moment briefly frozen in time, yet part of the earthly day is ready to burst forth with life-giving energy and warmth for Mother Earth and her inhabitants. 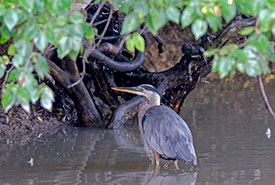 The great blue heron — a symbol of wisdom and self-determination. (Photo by Lorne)

Now well into my seventh decade, one could question why I’m out there at that time of the morning with camera in hand, choosing, if need be, to remain quiet and stationary for hours on end while scanning the marsh and sky for any sign of movement. Some might even suggest that my actions, or lack thereof, suggest I need a room at “the home,” but they’d be wrong. You see, as a wildlife photographer I’m learning (albeit slowly) that my inquisitiveness is the catalyst that helps shape some of the mental images I hope to capture. My inquisitiveness helps me make the important early decisions regarding the best location and conditions and it provides a framework for an element of success on each photographic journey. It complements my gradually improving skill set, my self-determination and self-reliance, the comfort found in solitude, and the desire to live in the present with nature.

At one time, I only saw in the mirror a person looking back — a physical entity tied to my heritage and lessons learned through example and experience. Today, however, I’m more sure than ever that my emotional and spiritual qualities either have been or continue to be shaped by connections beyond mortal comprehension.

As a young boy, over six decades ago, I was encouraged to smell the earth, search for treasures in the water and find confidence in my self-taught abilities. It could best be described as a different time, one in which many hikes were dependent on canned sardines and a few stolen matches, and one in which my biological and communal parents fully supported the joy I felt while being a free-range kid. I don’t recall there ever being a rejection to the many strange and wonderful “friends” that appeared in my bug boxes and water pails before returning them to the wild. I was even allowed to paint, with oils, a nearly life-size great blue heron on my bedroom wall. In my later teens when I took a mail order course in basic taxidermy, I never saw an eyebrow raised — until the freezer revealed its frozen treasures. 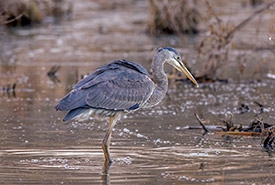 Great blue heron at Cranberry Marsh, ON (Photo by Lorne)

That great blue heron standing in my painted marsh stood over a metre in height. Had it been able to fly, it would surely have displayed a wingspan approaching two metres. To me, its beautiful blue colours were magical. I can’t help but wonder if this proud, elegant, independent creature is my animal totem. Maybe the great blue heron has been guiding me physically and spiritually for 75 years. Perhaps it’s no coincidence that my painted heron wading in its secret marsh searching for food, and my present-day images captured through the lens, are so much alike.

Online research indicates that Indigenous peoples describe the attributes of herons similarly. To many, it is a revered totem with qualities not too unlike those I want to see in myself.

While I will neither fly powerfully and gracefully overhead nor be seen silhouetted against the sky, I’m part of a symbiotic relationship — one I will always be grateful for while I wonder if I chose the great blue heron or it chose me. 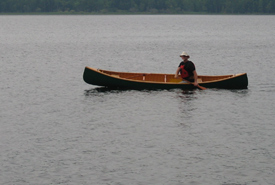