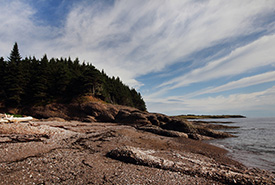 Standing on the shores of the Gaspé Peninsula, there is a certain serenity that washes over you like waves.

Here at the Nature Conservancy of Canada’s (NCC’s) pointe Saint-Pierre (Point St. Peter) property, you can completely immerse yourself in a 360-degree nature experience.

Pointe Saint-Pierre forms the easternmost point of the Gaspé Peninsula, halfway between the towns of Gaspé and Percé. The property boasts meadows, forests and 10-metre-high cliffs that line the shorelines of the Gaspé coast.

“In its northern reaches are fields and countryside surrounded by the Gulf of St. Lawrence. There’s a trail that NCC maintains that allows visitors to explore these habitats,” explains Olivier Perrotte-Caron, project coordinator in NCC’s Quebec Region. “On the southern end of pointe Saint-Pierre is Green Point — a rare, intact coastal forest found in this part of the Gaspésie.”

A heavily wooded area that sits along the ocean, Green Point is Olivier’s favourite spot to explore at pointe Saint-Pierre.

“I have a wonderful memory of my first walk in the Green Point area, walking through the forest, guided by the sounds of the ocean, to reach the coast,” he recalls. “I remember being blown away by the beauty of this place. It was a beautiful day and the ocean was calm. A few common seals were sunning themselves on the small islands. We spotted hundreds of marine birds. The stunning Percé Rock rose on the horizon.” 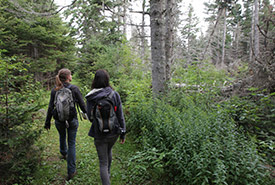 The distinctive ecosystem at pointe Saint-Pierre supports many different mammals and birds. Large flocks of ducks can be found here in the spring and fall, including Barrow’s goldeneye, which depends on undisturbed coastal zones and tree cavities for nesting.

“Located halfway between the large bird colonies of Bonaventure Island and the Forillon Peninsula, and a few wing flaps away from that of Plate Island, pointe Saint-Pierre’s location is beneficial for observing many species of marine or coastal birds,” says Olivier. “Between the rough waters of the Gulf of St. Lawrence and the more tranquil waters of the Gaspé Bay and the Malbaie barachois, there are high-quality habitats for several species.”

While visiting pointe Saint-Pierre, Olivier has had the opportunity to observe some of this area’s most majestic species.

“I’ve been able to observe Barrow’s goldeneye and harlequin duck near the coast. Near the end of summer, it’s sometimes possible to see fin whale, humpback whale, minke whale and, on rare occasions, blue whales.”

There is no shortage of natural wonders to see and explore in the Gaspé. In fact, in 2011 National Geographic Magazine named the region one of the top tourism destinations in the world. 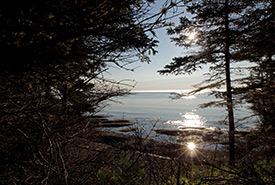 Not only does the area boast beautiful viewpoints and an abundance of wildlife, pointe Saint-Pierre has a rich historical importance too. (Photo by Mike Dembeck)

Not only does the area boast beautiful viewpoints and an abundance of wildlife, pointe Saint-Pierre has a rich historical importance too.

“From the beginning of the 16th century, crews of fishermen from the Basque Country, Brittany and Normandy came to fish on the coast of the Gaspé Peninsula. Pointe Saint-Pierre was in a privileged geographical position, due to its proximity to fishing banks and shipping lanes, as well as the shelter provided by its cove,” explains Olivier. “In the middle of the 19th century, thanks to various fishing enterprises, more than 200 inhabitants lived on pointe Saint-Pierre, making it one of the high points in the social and economic history of the Gaspé Peninsula.”

Today, this area is enjoyed by visitors looking to surround themselves in the finest that nature has to offer. Among them is Olivier who, like many other Canadians, looks to nature as a source of identity and culture as rich as the biodiversity at pointe Saint-Pierre.

“Canada’s natural legacy is an immense treasure that belongs to us all. It defines us as Canadians. It’s our identity, it’s in our DNA. We have this unique opportunity here to connect with nature,” he says.