Naturalists notice nature - even in winter 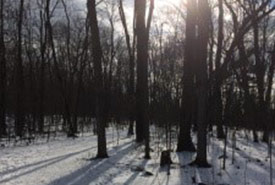 For some, it is easy during cold, snowy days (when it’s supposed to be spring!) to curl up with a cozy blanket, a good book, and a hot cup of tea. But where does the wildlife go at this time of year? Sure, some animals migrate to where it is warmer (sounds like a good idea about now…), but others seem to do just fine despite their surroundings.

When you look at this picture on the left, what do you see? This is a typical question we ask the Kingston Junior Naturalists during our twice-monthly meetings. “Not much!” one kid yells. “Snow!” another one says (cheeky little kids). But if you look closer, there’s a lot more happening than you may first think.

As leaders of the Kingston Junior Naturalists, we try to incorporate as many natural items as possible during our indoor evening meetings, but it is not the same for the kids as going outside to notice nature for themselves. So, once a month, a field trip is organized to various natural areas to get a taste of what the outdoors is really like.

This month, I joined the Junior Naturalists on their field trip to The Elbow Lake Environmental Education Centre. At first, I wasn’t sure how we could keep busy for an afternoon in the cold and snow. And you can probably imagine, when we arrived after the hour-long drive, the kids burst out of the cars and started sliding around on the icy paths, paying very little attention to us leaders. 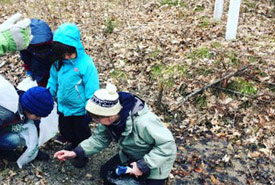 But it is amazing how quickly kids will focus when you can show them something in your hands. We acted like real field biologists and set up a sampling grid, which consisted of pylons at four corners of an area approximately the size of four classrooms. We asked the juniors to search for signs of wildlife within the designated area. When they found something, they put a stake tied with brightly coloured flagging tape beside it.

You can tell a lot about an animal by looking at what it has left behind. An easy sign to see, and one the kids were especially excited about pointing out (unsurprisingly), is a pile of (or single piece of) scat. From scat, you can tell what species was there and what it might have been eating. Similarly, footprints in the snow or tracks can help identify the species. They can also help decipher in which direction and how fast the individual was going, based on the orientation and spacing of the track. Other signs of wildlife in the winter include holes in the snow where small mammals are likely building tunnels, and holes and scars in trees where insects are likely hiding. 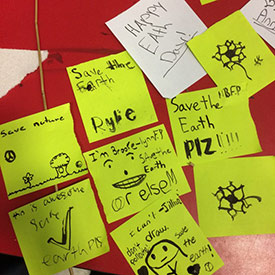 Messages from Junior Naturalists (Photo by Dispatches from the Field)

When the time was up, we looked into the grid again and saw a sea of brightly coloured flagging tape…even though we didn’t actually have a single wildlife sighting. And really, this is how field biologists often spend their time! If you’re studying a cryptic species, you are usually just documenting signs of their presence and are lucky if you get to see them in the flesh. In those cases, we get super excited to even find a feather. (There are ways to increase the chance of seeing your study species, such as covering your camera in a pile of dung, but we weren’t ready to let the kids in on that secret!).

In the end, although the kids did not remember why exactly they’d put up the flagging tape in roughly half of the flagged spots (admittedly this can happen with field biologists too…), they had fun noticing nature by themselves!

This post originally appeared on Dispatches from the Field and is reposted with permission.

Sarah Wallace is a seabird biologist and a co-founder of Dispatches from the Field.