Parasitism: The dark side of symbiosis 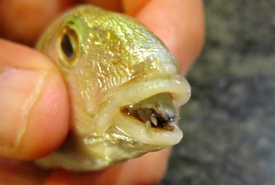 In nature, when two individuals of different species often live in close association with each other, this leads to a phenomenon called symbiosis. There are three types of symbiosis:

Parasites can be protists, bacteria, viruses, fungi, plants or animals. An estimated 40 per cent of animal species are parasites. Some parasites live on their hosts (ectoparasites) while others live inside them (endoparasites).

When thinking of parasites, the first examples that may come to mind are fleas and tape worms. Fleas are ectoparasites since they live on other animals' skin and suck their blood. In contrast, tape worms are endoparasites, as they attach to other animals’ guts to absorb nutrients from the food they eat.

Fleas and tape worms, in my opinion, are not the most interesting parasites. More fascinating examples exist, many of which seem like they could be from a sci-fi horror flick. Read about these partnerships below:

Crustacean got your tongue?

A crustacean called the tongue-eating louse targets fish, such as rose snapper and sand steenbras. It sneaks its way into the fish's mouth through its gills and attaches itself to the base of its tongue, where it drinks the fish's blood. Eventually, the tongue detaches due to blood loss. The louse then fastens itself to the tongue stub, functioning as the fish’s tongue from that point on. The tongue-eating louse is the only known parasite that replaces a host's organ. 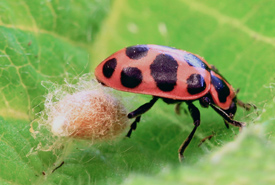 A species of female parasitic wasps lay their eggs inside unsuspecting ladybugs by inserting their stingers into their undersides, and injecting various chemicals in the process. Once the wasp larva has hatched, it consumes fluids that have been filled with nutrients from prey the ladybug has digested into the ladybug's body cavity.

About three weeks later, the larva exits through an opening in the ladybug’s exoskeleton and makes a cocoon for itself shortly after. While this doesn’t kill the ladybug, the chemicals previously injected into the ladybug by the adult female wasp prevent it from moving. The ladybug is forced to guard the now vulnerable wasp larva from predators, instinctually moving its legs whenever a predator comes near and scaring it off. Once the wasp larvae emerge from their cocoons, the ladybugs have fulfilled their purpose and most die shortly after. 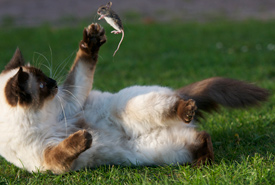 Have no fear: Toxoplasma gondii is here!

The protist Toxoplasma gondii infects rats and mice when the rodents come into contact with cat feces, producing thousands of cysts in their brains. To move on to its next life cycle stage, T. gondii must somehow enter a cat’s digestive system. It accomplishes this by making their hosts “gutsy.”

Once infected by the protist, rats and mice no longer avoid cat odours. They bravely come close to cats, increasing their chances of being eaten.

Once T. gondii reaches a cat’s gut, it’s able to reproduce. The parasite then leaves the host through its fecal matter, restarting the cycle.

Being eaten alive is no fluke 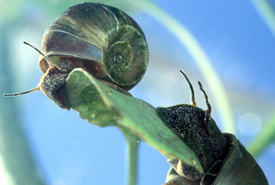 The fluke, which is a type of parasitic marine flatworm, starts its life cycle inside a horn snail. As soon as the larvae come across a suitable killifish, their next host, they attach to its gills and travel to its brain.

Once infected, the fish is more likely to be eaten by birds. But this isn’t just a fluke: the larvae secrete chemicals that raise dopamine levels and reduce serotonin levels, causing the fish to jerk around, jump and spend more time near the water’s surface.

The larvae make the fish more vulnerable to bird predation because in order to reach maturity and reproduce, the larvae must enter bird guts. When birds poop, the fluke eggs are deposited into the water. Horn snails then eat the bird waste, restarting the cycle. 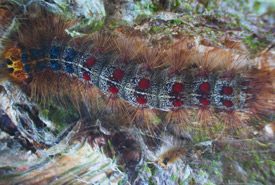 When baculoviruses infect caterpillars, they turn them into daredevils that climb to the tops of plants, where they are more noticeable to predators. The viruses accomplish this by changing how caterpillars respond to light.

Once the caterpillars have reached the tops of plants, genes in caterpillar cells are activated, producing certain enzymes that dissolve the caterpillar into goo. The virus-filled caterpillar “soup” drips down to the leaves below, which are then eaten by other caterpillars, who then become infected with the baculovirus.