In early spring the world hovers in limbo
Water drips and melts from tree branches and towering drifts
Drizzling into rivers, sneaking across roadways,
filling lakes with the cold, fresh promise of summer

But night skies are frozen, laced with blank-faced stars
That give away nothing; no hint of coming warmth

Wood frogs emerge in the glowing blue of evening light
They stumble sleepily onto the ice of that thawing lake
Tilt their heads back and sing to the starry dusk:
"Chuck-chuck-chuck-chuck-chuck!"
Calling out for love into the trickling quiet

From deep in the forest: a low bass thrum
the wings of a ruffed grouse
Time with my heart, which beats a loud rhythm of anticipation

I'm waiting for another
Who breeds in this special in-between
Whose loud, clear voice can pierce this tension
of an atmosphere that lingers on the knife edge of winter
But is tempted and wooed by spring 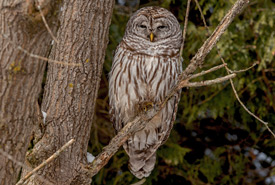 The snow beneath me,
melted then frozen, thawed then stalled,
Crunches and squeaks
Until a sound stills my boots, and locks me in place
I become a mannequin in this night’s display window

My head turns in slow motion to the left,
The cold, damp wind tickles my cheek

Was that it? The call I've been waiting for?
The one that haunts my memory through the darkest days of winter?

I hear it again. Closer now and to my right

From deep inside, almost reflexively,
I call out into the darkness, my breath forming an aura of hope
"Hoh-ho-ho-ho! Hoh-ho-ho-hoo-hoo-hoo-hoo!"
(I didn't realize there was a bird living in my belly)

Then in a moment of sheer magic, a dark body glides silently across the stars
The frogs stop chucking
The grouse’s wings fall still
The drip of meltwater seems to cease

The only sound is the "click" of talons making contact with a tree branch
Which bounces once, deeply, under the new weight

Brown eyes illuminate, flash knowingly at me and suddenly
the air between us is alive with electricity
The barred owl calls back to me
And this early spring night explodes in fireworks