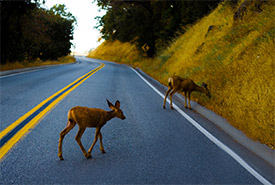 From Victoria to St. John’s, the Trans-Canada Highway stretches across 8,030 kilometres of landscape in Canada. While it covers a lot of ground, it also fractures many habitats that are home to a variety of animals. Deer, moose, bears and even birds and turtles regularly make dangerous crossings along highways and rural roads. They move around or migrate long distances in search of habitat, food, shelter and mates. And some journeys are quite remarkable. Thousands of barren-ground caribou travel toward the Arctic tundra every spring to find food and suitable habitat to have their calves. In autumn, they turn back to reach warmer regions. However, they face many obstacles during their long journeys. 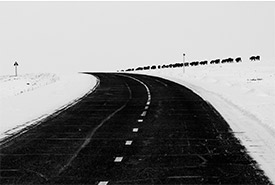 Animals near a road (Photo by Scopio Images via Canva)

As our modern roadways become increasingly busy, more and more collisions are occurring. When travelling through Newfoundland, you can often spot signs along highways tallying the number of yearly moose collisions; accidents that are dangerous for animals and for humans. While animals face many obstacles during their long journeys, roadways can be one of the deadliest. Animal and vehicle collisions happen regularly, especially where roads fracture habitat. It is estimated that one million animal-vehicle collisions happen every year in the U.S., costing over $8 billion dollars as a result of medical costs, towing, clean-up, vehicle repairs, etc. And according to the Globe and Mail, as of 2018, there were an estimated 14,000 collisions each year in Ontario alone. While collisions with smaller animals like porcupines and skunks are often underreported, in some regions of Canada this issue is pushing some species to the edge, including snapping turtles. 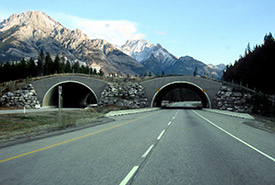 Trans-Canada Highway in Alberta, Canada, in the Banff National Park, between Banff and Lake Louise. (Photo by Qyd via Wikimedia Commons)

But don’t despair. There are viable solutions to maintaining habitat connectivity even across busy roads. Item one from the Biodiversity Action Agenda, co-authored by Women for Nature, ensures large landscape connectivity, emphasizing the need for conservation, regeneration and connection between wildlife habitats. Building wildlife crossings, in the form of underpasses and overpasses, has proven to be a successful mitigation strategy in many regions across the world.

This green infrastructure is designed to connect and protect biodiversity, as it fosters wildlife movement, breeding, feeding and access to vital habitat. These structures look similar to overpasses and underpasses used by cars and pedestrians along highways, but they’re designed exclusively for animals. Coupled with fencing and native vegetation, they funnel animals toward these safe crossings.

In the 1980s, Banff National Park began building an underpass and overpass system specially designed for animals. Before it was installed, there were up to 100 elk collisions every year along this stretch of the Trans-Canada Highway. Amazingly, the crossings drastically reduced this number to roughly six per year. Deer, elk, moose and even wolves, grizzly bears and eventually lynx began using the crossings. As wildlife adapted to using the new crossings, their habitats were reconnected, according to Vox. Other examples of wildlife crossings in Canada include Windsor, where a series of overpasses were built to allow snakes, deer and other animals to cross a new extension of the 401 highway. 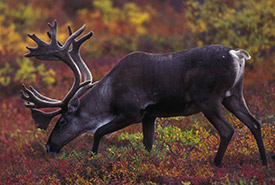 To ensure safe passage for both wildlife and humans across busy highways, ARC: Animal Road Crossing is building bridges (literally and figuratively) to help tackle this growing issue. As an interdisciplinary partnership led by Nina-Marie Lister, they are developing “new methods, new materials, new thinking, and new solutions” to reconnect the landscape. They began with a design competition back in 2010 that challenged diverse design teams to find solutions for animal road-crossing structures. To successfully reconnect the North American landscape, they had to be “cost-efficient, ecologically responsive, safe and flexible.”

ARC, however, is taking the idea of road-crossing structures one step further. They are turning their innovative designs into “living, learning laboratories” that not only track animal movement but also use monitoring devices to bring the natural world to ours. The project tells stories about the possibility of reconnection and reconciliation. They are stacking two worlds together while encouraging us to rethink space and reweave the landscape. Check out (Re)Connecting Wild, a wonderful documentary about “the remarkable story of the decade-long effort by the Nevada Department of Transportation and its partners to improve human safety by re-connecting an historic mule deer migration that crosses over both US-93 and I-80 in rural Elko County, Nevada.”

Preview the documentary below: