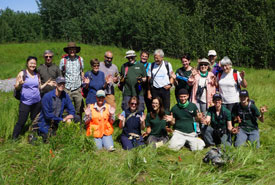 NCC volunteers and staff cap off the day with a silly jazz hands group photo. (Photo by NCC)

Having hosted 30 Conservation Volunteers (CV) events and worked with 489 volunteers so far this year, it’s been a whirlwind of a summer. And September has only just begun!

The summer may have been a blur, but thankfully, we captured on camera some fast-moving volunteers and dynamic natural spaces along the way.

Here are five of my favourite moments from my time as Alberta’s Conservation Volunteers assistant this summer. I hope you enjoy!

If you’re looking to get outdoors and lend a hand to nature, why not sign up for a CV event this fall to join the fun and see what it’s all about at www.conservationvolunteers.ca? 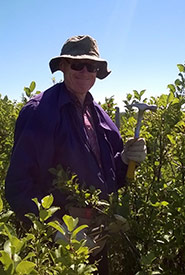 This summer I found out that removing fencing alongside volunteers can be a blast! With a hammer, fencing pliers and a smile, you can turn a hazard into a haven for wildlife! Of course, volunteers are the driving force behind this effort to create safe and sustainable wildlife migration routes in every province. 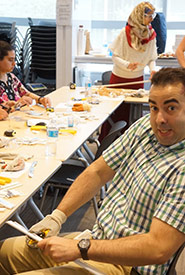 Ooh! I loved the enthusiasm of volunteers who helped us prepare over 10,000 fencing visibility clips in 2015/2016. We learned together that it requires a whole lot of grip strength and taping finesse! This summer, we brought and installed the clips across the border in Saskatchewan at Old Man on His Back Conservation and Prairie Heritage Centre. There, Conservation Volunteers and scientists are working to prevent endangered sage grouse from getting caught in hard-to-see fences. These clips make a big difference in those efforts. 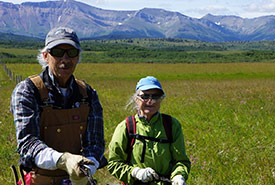 Errol and Pat Smith at windy Waterton (Photo by NCC) 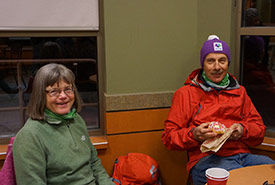 Pat and Errol Smith are two dedicated volunteers! For six years, they’ve come to CV events in Alberta. Errol was awarded the Golden Glove Award in 2015 for attending the most events in one season. Not only do they work hard at activities such as rolling wire in windy Waterton, but they also delight in doughnuts (pictured below on Errol’s birthday after an amphibian survey in the Crowsnest Pass). 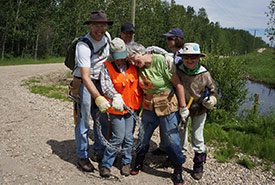 Conservation Volunteers having a good time (Photo by NCC)

I’ve made many new friendships throughout the summer, including at this fencing event in the boreal forest. With wet boots, Josefine (centre) is an inspiring volunteer who I have loved getting to know this summer! This group of good-natured volunteers like to have fun at events, but sometimes it’s hard to stop them from working! Thank you to our new and returning volunteers for all your hard work and laughs along the way. 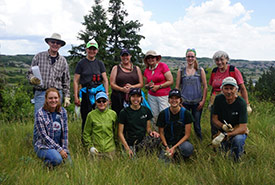 Thank you volunteers and staff for your work this summer! (Photo by NCC)

Group photo, anyone? It’s rare that Zoë Arnold and I are both in the same shot, as we’re often behind the camera. Except for this photo, on the right! Thank you to our volunteers and staff for your cooperation this summer and getting together for conservation events and sometimes awkward, but always rewarding, group shots. 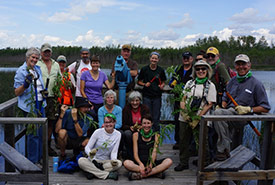 Conservation Volunteers with thistles as props (Photo by NCC)

It shows real dedication when volunteers pose with thistles as props! Thank you for a photo-worthy summer! 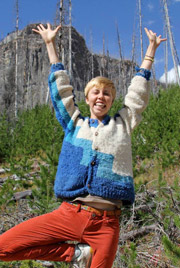 Kate Williams is a former Conservation Volunteers assistant with the Nature Conservancy of Canada Alberta region.