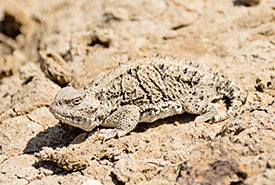 One of the privileges that come with working for the Nature Conservancy of Canada (NCC) is the opportunity to explore some of our country’s most endangered ecosystems and — if you’re lucky enough — encounter some of the rare species that live in these places. When I found out that one of the properties that I manage had been slated for an eastern short-horned lizard survey, I pounced on the opportunity to search for this elusive species.

This particular volunteer expedition was led by our partner MULTISAR (Multiple Species at Risk). Twelve searchers (including me and my summer conservation technician) worked in pairs to scour the steep coulee walls of the property.

Unfortunately, after hours of searching with no luck, we were all feeling quite discouraged. Our initial enthusiasm of the morning was quickly fading.

Our group leader kept asking, “Have you seen anything yet?” My response: “Oh, you’d know if I found one; in fact, I think the entire valley would!” 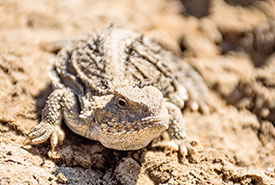 So we carried on, with the blazing sun on our necks and the sweat trickling down our backs. Then, just when I’d nearly given up hope, I saw the slightest movement in the grass. Sure enough, it was a lizard! An eastern short-horned lizard, no less (in fact, Alberta’s only lizard), recognizable by its short, wide body and scaly spike-covered skin.

I shrieked in delight and safely scooped the little guy up (prior to the survey, we’d been given training on how to properly handle this species). The team came running over, and the crew leader commented, “Not sure I’ve ever seen someone quite as excited!”

Excited was an understatement. Moments like these don’t come along very often, and to have a close encounter with an endangered species is something I will never forget. What surprised me the most was just how soft and gentle this creature was. I fell in love with his grumpy little face!

Eastern short-horned lizards are designated as endangered/at risk in Alberta, and are protected under Canada’s Species at Risk Act. 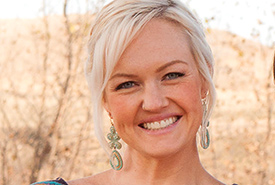 Leta Pezderic is the natural area manager for south-central Alberta.