Travel back to the Carboniferous 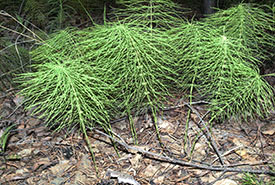 Alongside marshes and in forests and meadows lives a group of plants that are older than the dinosaurs.

Called horsetails, these plants have had quite a trek through time. This group is also referred to as the Equisetum genus, a type of biological classification that contains all known horsetail species.

Equisetum is the only genus of the Equisetales order (a higher-ranking biological classification that groups together genera) that has survived to the modern age. It is sometimes referred to as a “living fossil” because it has maintained traits that were once widespread in primitive land plants that existed hundreds of millions of years ago.

The first land plants were very different from those found today. They had no seeds, flowers or fruits. It was only around 350 million years ago — the end of the Devonian geological period and the start of the Carboniferous geological period — that plants became more complex and forests started covering the Earth.

Equisetales is considered relatively complex for a group of plants that flourished around 350 million years ago during the Carboniferous period. Plants in this group had vascular systems, which enabled the transport of nutrients and water within their bodies.

Globally, only 15 horsetail species exist today, with many occurring on more than one continent. By looking at these small, inconspicuous plants, you would never guess the history behind their traits.

Many of the horsetail’s primitive traits allowed its ancestors to endure the harsh conditions of many extinctions and climatic changes. Its horizontal underground stem — otherwise known as a rhizome — helps the plant reproduce and anchor itself to the soil. From just one rhizome, multiple clones of a single horsetail can grow together in one location, which explains why horsetail populations spread so quickly. 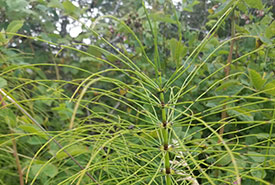 Horsetail can also reproduce via spores — a method exclusive to plants that existed before the evolution of seeds. Other plants, such as ferns and mosses, which have long lineages themselves, also depend on this feature for reproduction.

Why are these traits important? Well, they tell scientists a lot about the ancient forests that arose 350 million years ago during the Carboniferous period.

Instead of forests dominated by pines or maple trees, imagine lush forests of large horsetails as tall as 12 metres growing in ecosystems similar to wetlands. In this hot and humid environment, Calamites, the early cousin of modern horsetails, thrived and shaped the Carboniferous world. 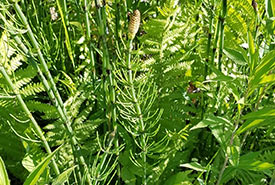 Calamites is not what you would expect for a “tree-like” plant. Though it looked like a tree and had bark, Calamites reproduced by spores and relied on its underground horizontal stem to clone itself, resulting in the growth of groups of Calamites together.

The Carboniferous period had a humid and tropical climate due to an abundance of carbon dioxide in the atmosphere. The primitive land plants with bark, especially Calamites, breathed in and stored the carbon dioxide within them.

As these plants died, the carbon was stored in the soil as peat (decaying plant materials). After layers and layers of soil and sediment built up over the years, the peat eventually turned into coal deposits. This process did not just occur 350 million years ago. In fact, it is still occurring now in some wetlands. Currently, the carbon dioxide locked in these ancient coal deposits is actually being released back into the atmosphere as humans burn it for fuel. 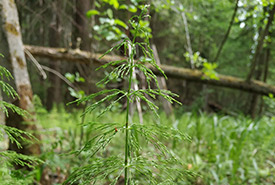 In many ways, the ancestors of horsetails shaped our modern world by paving the way for life on land. No matter how primitive, plants performed photosynthesis, a process that involves the conversion of atmospheric carbon dioxide into plant food and the excretion of oxygen. Because so much carbon dioxide in the atmosphere was absorbed by the many plants that lived 350 million years ago, a lot of oxygen accumulated in the atmosphere as a result. This made the terrestrial environment better for oxygen-breathers and allowed terrestrial animals to later diversify.

In a way, Calamites caused their own extinction. As they stored a lot of atmospheric carbon dioxide in the soil, the Earth cooled. The hot, humid environment that they lived in did not last long past the Carboniferous period, and since many of their traits depended on this environment, they became extinct soon after. This devastating event to plants like Calamites is known to paleontologists as the “Carboniferous rainforest collapse.”

If you want to experience this long-lost natural world yourself, paleontologists have created a virtual Carboniferous forest filled with realistic Calamites and other plants that you would never believe existed before. Many of these are the ancestors of “living fossil” plants today.

The next time you spot a horsetail, remember that you are looking at a Carboniferous legacy from 350 million years ago.