Where rivers and concrete meet the tall grass prairie 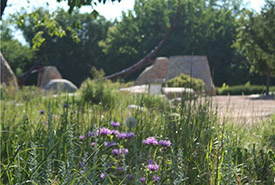 I am an urban dweller. Sounds like an ugly confession, but it’s really not. It’s a just a different way of experiencing my natural world on a daily basis.

Although I spent many years growing up in rural Manitoba and I still spend almost every weekend on the shores of Lake Winnipeg, my home is in the city. And not just inside the city somewhere near the outskirts, but minutes from downtown Winnipeg.

I can hear many of you now saying, “Ewwww; it’s too bad she’s so disconnected from nature on a daily basis,” but that couldn’t be further from the truth. While I don’t have large tracts of biodiverse landscape in my backyard, the city has many lovely natural spaces and features that I enjoy on a daily basis. And while they’ll never replace a hike in the woods or a swim in the lake, they serve as an important connection to the larger natural world. 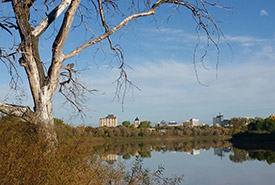 The river trail that the author takes on her way to work. (Photo by NCC)

While walking to my office at the Nature Conservancy of Canada (NCC), I often travel along paths located along the shores of the Red River. I walk through my tree-lined community, down to the river path and then out onto the street just a few blocks from the office. I often think of people stuck in their cars or on the train for hours making their daily commute. I can’t imagine that they’re experiencing the life of the river, the trees, the birds, and yes, even the deer and foxes that cross my path regularly. It’s all here in my urban world.

If I continue along the river path, past the turnoff to the office, (which, I confess, I’m often tempted to do), my journey takes me to NCC’s The Forks Prairie Garden, located in downtown Winnipeg. This 20,000-square-foot demonstration garden is in the heart of the city, just feet away from where the Red and Assiniboine rivers meet. It features native tall grass prairie grasses and wildflowers and provides visitors with a glimpse into Manitoba’s natural and cultural history.

Did I mention that there are four million visitors per year to The Forks? That’s a lot of people connecting to and learning about the tall grass prairie that might not have the chance otherwise. 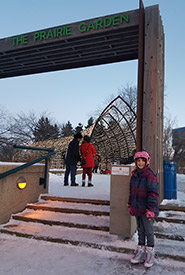 The author's daughter skating the trail around and through the garden. (Photo by NCC)

The Forks Prairie Garden was chosen as one of Manitoba’s premier Nature Destinations; a new NCC program launched in July 2017 that aims to connect Canadians to nature, and in turn, build a stronger culture for conservation. Recent updates to the garden include a new walking path, NCC recognition signage, some of which has been translated into English, French and Ojibway thanks in part to funding by the Winnipeg Foundation. Think of it as an opportunity for all of the people who rarely leave the city limits to experience a piece of their natural and cultural heritage through an urban tall grass prairie experience.

The world of land management at NCC comes from a place of science-based property management plans and biodiversity objectives. That’s awesome, and it often leads to questions about how an urban demonstration garden meets those goals. To put it simply, it doesn’t. But, what it does do is meet so many of NCC’s values: respect for nature and people, integrity, collaboration and cooperation. It also raises awareness of who NCC is as an organization, what we do and why our work is so important. (Did I mention four million people per year come through this place?)

To go a step further, urban sites like The Forks Prairie Garden give us urbanites a glimpse into the world of conservation. It highlights the need for organizations like NCC to do more, better, faster in a world where our citizens are more and more disconnected from nature. Urban living is often looked at as the reason for that disconnect, but thanks to special places like The Forks Prairie Garden, that doesn’t have to be the case.

The more we can connect with people to nature, through innovative and creative ways, the more success we’ll have as the nation’s largest conservation organization. And that’s something I feel great about! 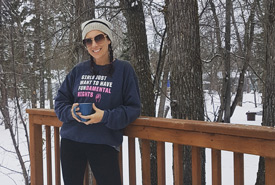 Christine Chilton is the community relations manager for the Manitoba Region of the Nature Conservancy of Canada.