How birds survive the winter 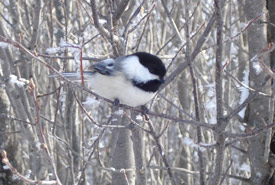 Winter on the Prairies is long and cold, often lasting from November until March, and with temperatures falling to -20 C or -30 C, it’s a wonder that anything can survive here at all.

However, a walk around any residential neighbourhood or out in the country will show it to be an active landscape. Of course, many species don’t try to brave the prairie winter and instead migrate hundreds or thousands of miles to warmer climates. The species that do stay have adapted differing strategies to survive the cold months.

Black-capped chickadees (hereafter, chickadees) are among my favourite birds. Chickadees are distributed across North America and are residents of wherever they’re found, which means they don’t migrate. I’ve always been amazed that chickadees are able to survive winter on the Prairies, as they are such small birds, weighing only nine to 14 grams (roughly the same weight as a triple-A battery). 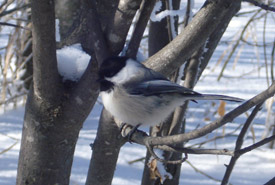 By putting on a jacket

One of the key factors for any species to be able to survive an extreme drop in temperature is by staying warm. Bird feathers are among the best insulators in the natural world. Their insulating properties are due to their structure, which allows air to be trapped close to the bird’s body, keeping it warm. On cold days, birds puff up their body feathers, trying to maximize this layer of warm air. The result of this feather fluffing in chickadees is adorable little puff balls adorning the tree branches. 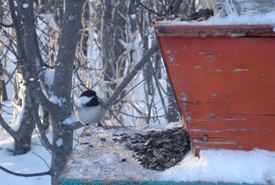 Black-capped chickadee at a feeder (Photo by NCC)

By grabbing a snack

Good insulation is useless without a supply of food to consume, to generate heat. The primary food source available to birds in the winter (especially on the frigid Prairies) are seeds and other plant matter, as temperatures are much too cold for insects to survive. Therefore, songbirds that rely on seeds are able survive the winter, while those feeding on a diet of insects migrate to warmer climates.

Chickadees are opportunistic and readily eat seeds and suet. As a result, they’re among the most common and frequent species visiting bird feeders. Chickadees are enterprising birds — not only do they eat seeds when they find them, but they also store them to eat later. This is called caching, and chickadees can remember thousands of different hiding places.

A third factor impacting winter survival is predation. The saying, “there’s safety in numbers” rings true, and chickadees form winter flocks for protective, as well as social, purposes. Being together in a flock means that there are more eyes on alert for danger. Also, the larger the group, the lower the odds that any one individual will become victim to predators. It would be reasonable to think that being in a group would allow members to cluster together for warmth (known as social thermoregulation to scientists). On some cold days, chickadees can be observed sitting close together, presumably for this purpose. However, even when temperatures are well below freezing, chickadees usually sleep in their own individual cavities.

Chickadees are amazing little birds with feisty attitudes, and I enjoy watching them at my feeders over the winter. I’ve come to expect their boisterous “chicka-dee-dee” calls whenever I’m replenishing the feeder. This winter will mark my 11th year participating in the Project Feederwatch program, a citizen science project that includes documenting and reporting the different species and number of individuals visiting your feeder.

Studies have found that black-capped chickadee winter survival is higher when supplemental food is provided, particularly when temperatures reach the frigid lows like those experienced on the Canadian Prairies. This highlights another factor that influences winter survival: humans. In this case, it’s a comfort to know that I, and many others, are having a positive effect on black-capped chickadees.